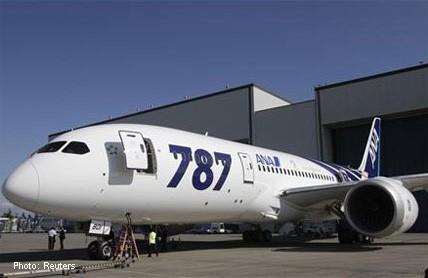 It's the plane so nice, they unveiled it twice. Boeing once again presented its long-awaited and much-delayed 787 Dreamliner to client All Nippon Airways, but this time the goods were officially delivered. After taking the wraps off the airliner early this August, the aerospace company managed to get a flight-ready unit over to its Everett, Washington production plant for a celebratory hand-off. Despite a fit of stops and starts for the line's rollout, Boeing expects to meet ANA's order of its future 55-strong fleet, producing an additional 20 craft for the Japanese airline by 2013's end. If you want to be among the select few to call "First!," you might want to consider booking that Japan-bound vacation now.
In this article: 787, 787 delays, 787 Dreamliner, 787Delays, 787Dreamliner, aircraft, airline, airlines, airplane, airplanes, All Nippon Air, AllNipponAir, ANA, Boeing, Boeing 787, Boeing787, dreamliner, Dreamliner delays, DreamlinerDelays, jet, jets, minipost, plane, planes
All products recommended by Engadget are selected by our editorial team, independent of our parent company. Some of our stories include affiliate links. If you buy something through one of these links, we may earn an affiliate commission.
Share
Tweet
Share