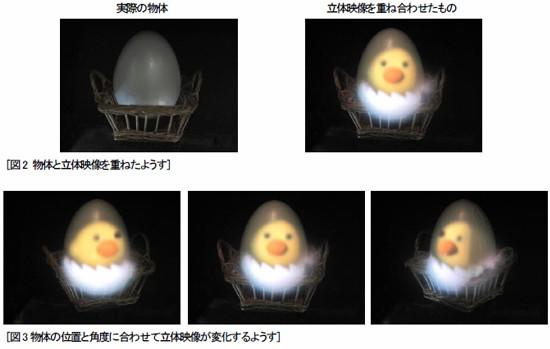 We might not have chosen the above weird baby chick to pitch our autostereoscopic technology to the world, but at least it makes for some memorable imagery. The hatchling is a 3D image generated by projectors, overlayed on top of a real world object, which can be viewed by multiple people at multiple angles without the need for 3D glasses. Built-in sensors detect the viewer's positions and adjust the viewing angle accordingly. Of course, this isn't the first time we've seen this sort of technology -- heck, this isn't even the first time we've seen this sort of thing from Hitachi, but the company says it's continually getting better, with a marked depth resolution improvement over a technology shown off this time last year at CEATEC. The company is looking to implement the technology for both digital signage and entertainment purposes, eventually revolutionizing the way the world looks at 3D baby chickens.
In this article: 3d, AutoStereoscopic, ceatec, ceatec 2011, Ceatec2011, chicken, egg, glasses-free 3d, Glasses-free3d, hitachi, projector, stereoscopic
All products recommended by Engadget are selected by our editorial team, independent of our parent company. Some of our stories include affiliate links. If you buy something through one of these links, we may earn an affiliate commission.
Share
Tweet
Share