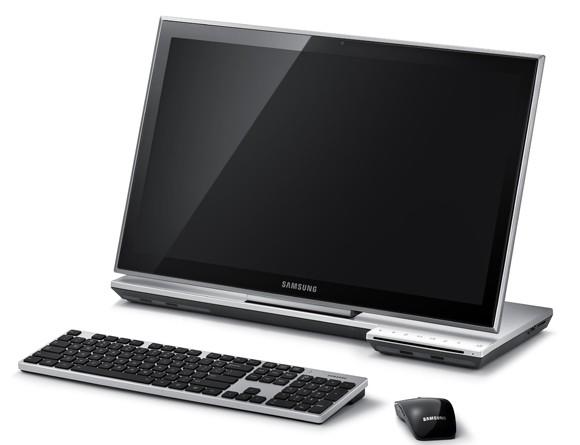 There must be something in the water: first Toshiba decides to give this all-in-one thing a whirl and a few months later, Samsung's jumping on the bandwagon, too. The company just added a desktop to its Series 7 lineup, making it Sammy's first all-in-one for the US market. It'll be available in two configurations, but either way you're in for a 23-inch, 250-nit display with 1080p resolution and support for two-finger gestures. Other specs include four USB 2.0 ports built into the base (along with one of the 3.0 persuasion), a 1TB 7,200RPM hard drive, a 1.3 megapixel webcam, Bluetooth 3.0 and dual four-watt speakers. And, depending on which config you choose, you'll get either a 2.6GHz Core i3-2120T CPU and 6GB of RAM or a 2.7GHz Core i5-2390T processor with 8GB of memory. Sadly, both models cap the graphics off with Intel's integrated option, which means this may or may not be the right choice for game-loving Samsung fans. Look for them on October 10th for $999 and $1,199, depending on the model. Oddly, the company isn't issuing a press release until Monday (we'll update this post when we see it) but for now, skip past the break for one extra pic.

"Samsung's new all-in-one PC provides all of the benefits of a full-sized desktop computer without the cumbersome tower and wires often associated with that form factor," said Scott Ledterman, director of mobile PC marketing at Samsung Enterprise Business Division. "It's an ideal choice for consumers looking to upgrade their PC, as it will provide them with the latest technology while freeing up valuable desk space in their home or office setup."

The Samsung Series 7 All-In-One PC was designed with luxury in mind. The 23-inch screen measures only 16mm thin, creating a stunningly sophisticated look when paired with the PC's sleek, metallic surface. The monitor's base encloses all the PC's key components and features while taking up minimal space on the user's desk, while the Series 7 All-In-One's sleek lines, wireless keyboard and streamlined mouse are sure to turn heads in any home or office setting. The full flat design enables users to lay the PC all the way down, creating a full horizontal touch interface, perfect for gaming, using art and design programs or inviting a large group to gather around the screen to view content.

Advanced Technology for Work and Play

Featuring an Intel® CoreTM i3 or Intel® CoreTM i5 processor and Windows® 7 Home Premium operating system, the Samsung Series 7 All-In-One is an ideal computer for both business and entertainment.

The Series 7 All-In-One features Samsung's advanced TV technology, which makes video come alive on the product's Full HD, LED-backlit display. Adding to the home theater experience is the inclusion of Harman Speakers and Harman-optimized audio features, which result in a top-of-the-line sound experience, perfect for listening to both music and videos. The Series 7 All-In-One also features surround sound, powered by the SoundAlive™ sound enhancer, for the ultimate audio experience. An integrated HD webcam and DVD player complete the multimedia package.

The Samsung Series 7 All-In-One PC was built to be easy on the eyes and the mind as well. Samsung's advanced touch screen technology provides a more accurate and responsive experience, enabling you to quickly navigate through the simple user interface, the web and more. Additionally, the innovative Samsung Touch Launcher software allows you to make the most of the All-In-One's touch screen by providing touch-based access to your favorite applications from the desktop.

Samsung's exclusive Easy Settings make it effortless to connect the Series 7 All-In-One to new wireless networks, projectors and more by giving you easy access to commonly used PC settings. Samsung Easy Migration allows users to seamlessly transfer existing files to the new computer by connecting it to their old PC, launching and starting Easy Migration and letting the PC do the rest.

The Samsung Series 7 All-In-One PC is scheduled to be available starting October 10, 2011. The MSRP ranges from $999 – $1,199, depending on the model. All Samsung PC products are available through Samsung resellers and distribution channels. For a full list of retailers, call 1-800-SAMSUNG or visit www.samsung.com.

In this article: 23 inch, 23-inch, 23Inch, all in one, all in one pc, all-in-one, all-in-one PC, All-in-onePc, AllInOne, AllInOnePc, core i3, Core i5, CoreI3, CoreI5, desktop, desktops, Samsung, Samsung all-in-one, samsung series 7, Samsung Series 7 All-in-One, SamsungAll-in-one, SamsungSeries7, SamsungSeries7All-in-one, Series 7 All-in-One, Series7All-in-one
All products recommended by Engadget are selected by our editorial team, independent of our parent company. Some of our stories include affiliate links. If you buy something through one of these links, we may earn an affiliate commission.
Share
Tweet
Share