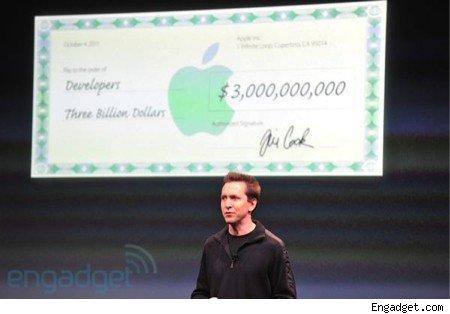 Scott Forstall dropped some impressive numbers about iOS and the App Store today. He told the audience that iOS has grabbed the #1 mobile-operating system spot with a 43% market share. Android is in second place with 33%. Those numbers as of July and are reported by ComScore.

The App Store now has more that 500,000 apps, with 140,000 of those being designed specifically for the iPad. Those numbers make Apple's App Store the number one store for apps in the world. Most impressively, iOS users are downloading more than a billion apps a month now. Total app downloads have now exceeded 18 billion. Best news for developers is that devs have earned over $3 billion off their apps so far.

In this article: app store, apps, AppStore, ios
All products recommended by Engadget are selected by our editorial team, independent of our parent company. Some of our stories include affiliate links. If you buy something through one of these links, we may earn an affiliate commission.
Share
Tweet
Share