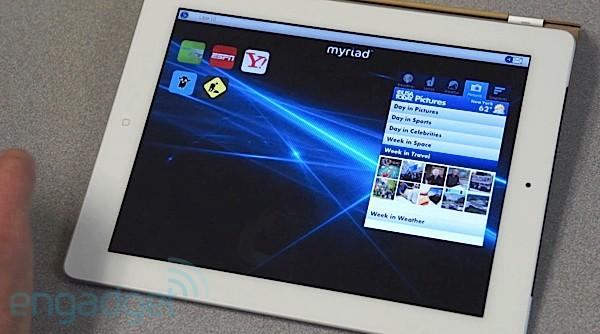 Last week, Myriad outed its plans to unveil Alien Dalvik 2.0 -- which works on iOS -- at CTIA, which starts today. But, knowing our readers would be champing at the bit to see it in action a little early, we got an exclusive sneak preview of the software for you right now. As a quick refresher, Alien Dalvik's a custom bit of code that lets you run unaltered Android apps on a non-Android OS, like Maemo or MeeGo. This new version brings that same black magic to iDevices (and just about anything else), so head on past the break for more about Myriad bringing Apple and Android together in app harmony.


We got to speak with Olivier Bartholot, Myriad's VP of Business Development about the new platform, and he explained that this second iteration of Alien Dalvik differs from the first in a significant way. Version 2.0 runs in the cloud with Netzyn's servers doing all the heavy lifting, as opposed to the original where the native host environment resides on the gadget itself. So, devices with this new Dalvik on board get an H.264 video feed of Android with some secret sauce letting users interact with the apps -- not unlike Onlive's cloud gaming service. The company says it can port Alien Dalvik to any operating system, which grants TVs, in-flight entertainment systems and cars access to apps without changing the existing infrastructure to run the full Android OS. Myriad's working with an unnamed partner to create an Alien Dalvik store that'll be the sole provider of apps for the platform, because downloading apps from Android Market and other sources won't be an option. There's currently no support for Honeycomb apps, but Olivier informed us that such functionality is in the works.

As you can see in the video above, the new Alien Dalvik isn't nearly as smooth as native Android. But, you should keep in mind that it's still in beta, and Myriad got Android apps functioning on an iPad without jailbreaking or help from Apple, which is pretty darn impressive. Olivier told us that there are some user interface issues with non-touchscreen devices (think TV remotes) that must be figured out as well. Native performance is the goal, however, and he's confident that the company will be able to pull it off. Myriad's currently in talks with car manufacturers, avionics firms, Samsung and others to get Alien Dalvik on their products, so we'll be seeing Google's little green bots in some unexpected places in the not-so-distant future. The plan is to have Alien Dalvik ready for prime time in the first half of 2012, so we've got to wait a bit longer for cross platform app nirvana. The clock is ticking, fellas.

ZURICH, Switzerland – October 06, 2011 – Myriad Group AG (SIX: MYRN), a global leader in mobile technology having shipped over 3.8 billion software apps on more than 2.2 billion phones, today unveils Myriad Alien Dalvik 2.0. Building on the successful launch of Myriad Alien Dalvik, Myriad's latest Alien release will not only enable Android apps to run across non-Android smartphone platforms, but will now enable the Android ecosystem to be extended across multiple devices and screens such as tablets, e-books, TVs, automotives and even avionics. Myriad will be showcasing Alien Dalvik 2.0 and its multi-screen strategy, demonstrating Android apps on Apple iPad for the first time at CTIA Enterprise & Applications 2011 next week.

"We have seen incredible momentum in Android adoption, but we are just scratching the surface," said Simon Wilkinson, Chief Executive Officer, Myriad Group. "Digital screens such as Internet- enabled TVs and in-vehicle displays, along with other consumer devices like tablets and e-books are proliferating at an astounding rate. Consumers are driving multimedia evolution and are demanding more converged multi-screen services. With Alien Dalvik 2.0, we are creating a more flexible, consistent user experience by mobilizing content such as live sports, recorded TV shows and on-demand movies, so users can enjoy content seamlessly from one device to the next."

Alien Dalvik 2.0 is the first step towards creating a single app standard and marks yet another key milestone for Myriad Android innovations. Alien Dalvik 2.0 enables the majority of Android apps to run unmodified using Android Package (APK) files. This in turn allows app store owners and publishers to quickly transcend multiple platforms and screens, leveraging existing software and middleware, all without compromising performance. Furthermore, Alien Dalvik 2.0 enables developers to create once and use many times, while allowing operators, OEMs, and even enterprise to streamline app rollout - taking the headache out of platform fragmentation and content management.

From a user perspective, Alien Dalvik 2.0 is completely transparent and installed without user disruption. Users simply enjoy the same rich Android ecosystem they have become accustomed to via mobile on other key screens, such as playing Angry Birds on HDTV. This all while gaining faster access to a wider range of apps, thus encouraging a higher frequency of downloads and increased ARPU.

"As demand for multi-screen services grows, and as the telecommunications industry becomes a content business, service providers will have new opportunities to leverage their service delivery platforms and collaborate with content providers to develop converged multi-offerings. Alien Dalvik 2.0 provides a great alternative to OEMs and service providers who want to harness the Android ecosystem, while leveraging existing investments and retaining control of their customer experience," added Wilkinson.

From application components to complete device integration, Myriad provides best-in-class Android solutions. As a founding member of the Open Handset Alliance (OHA), Myriad has exceptional expertise in runtimes and has been playing a key role in Android solutions since its early days.

Myriad will be showcasing Alien Dalvik 2.0 in action, demonstrating Android on the Apple iPad at this year's CTIA Enterprise & Applications in San Diego from October 11th-13th at Myriad's Hospitality Suite at the Hilton San Diego Bay Front, 1 Park Boulevard, directly adjacent to the San Diego Convention Center.
In this article: alien dalvik, AlienDalvik, android, app, apple, apps, ctia, ctia ea 2011, CtiaEa2011, dalvik, exclusive, google, hands-on, ios, mobilepostcross, myriad, myriad alien dalvik, MyriadAlienDalvik, video
All products recommended by Engadget are selected by our editorial team, independent of our parent company. Some of our stories include affiliate links. If you buy something through one of these links, we may earn an affiliate commission.
Share
Tweet
Share