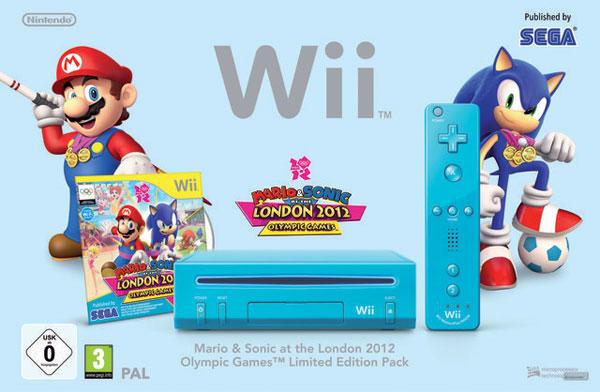 You didn't expect the Olympics to land in London without a video game tie-in snapping at its heels, did you? Of course not, but did you expect it to be bundled with a powder-blue console? Here's the skinny: Nintendo's Mario & Sonic at the 2012 Olympic Games Limited Edition Pack pairs the outfit's upcoming Gamecube-free Wii refresh with the ghetto fabulous chromatic pop of the 1970s' tackiest grooviest tuxedo craze. Like the "Family Edition" bundle that clued us in on the hardware refresh, this package has only been announced for Europe, and there's still no word on how much either set will cost. Nintendo of Europe says they will be announcing additional bundles later this year, but if you just have to have a matching console for your blue Wiimote, you can pick one up November 18th.
In this article: bundle, christmas, console, family edition, FamilyEdition, game, gamecube, holiday, Nintendo, nunchuk, Olympics, price, price cut, PriceCut, release, uk, update, wii, wii party, wii remote plus, wii sports, wii u, WiiParty, WiiRemo, WiiRemotePlus, WiiSports, WiiU
All products recommended by Engadget are selected by our editorial team, independent of our parent company. Some of our stories include affiliate links. If you buy something through one of these links, we may earn an affiliate commission.
Share
Tweet
Share