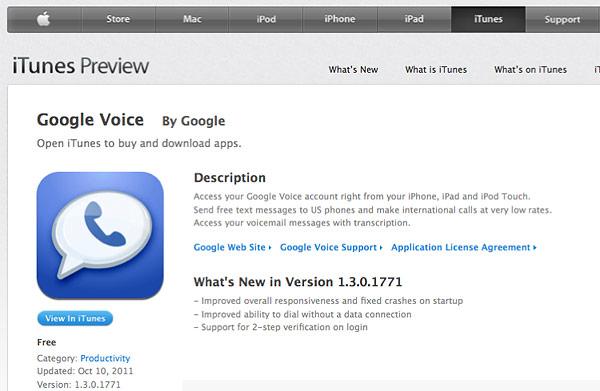 What once was there now is gone. Earlier today, Google Voice was just two clicks away in the iOS App Store. Now, all that remains is a page cache (at the source link below) and versions of the app that were already installed on iPhones and iPod touches. Vincent Paquet, Senior Product Manager for Google Voice confirmed that the app had been pulled, explaining "our last update of this week had a bug that caused the app to crash at sign in. We removed it so it did not affect additional users until the fix gets published." We've been using the most recent version -- 1.3.0.1771 -- on an iPhone 4 running iOS 5 without issue, but recent reviews cite the reported crashing, so it's definitely affecting at least some users. We don't have an ETA for when you can expect the app to return, so if you don't already have it installed, you'll need to hang tight for the time being. The service should function normally otherwise, assuming your phone number has already been registered, though you won't be able to begin new text threads or make outgoing calls using your Google Voice number.
In this article: app store, apple, apple iphone, AppleIphone, AppStore, bug, bugs, call, calling, calls, google, google voice, GoogleVoice, gv, ios, ios app, IosApp, iphone, iphone 4, iphone 4s, Iphone4, Iphone4s, iphones, issue, issues, mobilepostcross, pulled, removal, removed, Vincent Paquet, VincentPaquet
All products recommended by Engadget are selected by our editorial team, independent of our parent company. Some of our stories include affiliate links. If you buy something through one of these links, we may earn an affiliate commission.
Share
Tweet
Share