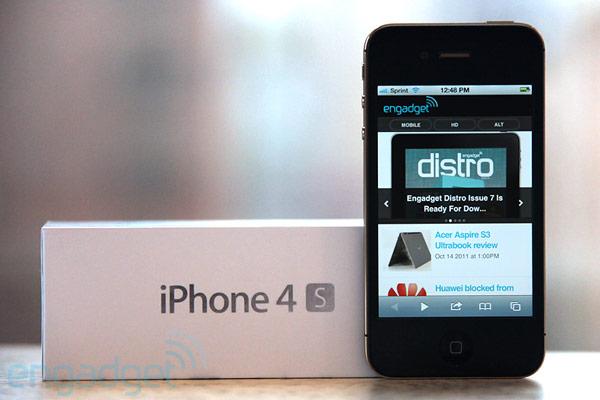 How did you spend your weekend? If you're Apple, the answer is simple, really: selling a whole lot of iPhones. Cupertino this morning announced that iPhone 4S sales have reached four million -- quite an impressive number compared to what its predecessor was capable of, a fact no doubt helped by the addition of some carriers, like Verizon and Sprint here in the States. The handset is currently available in the US, Australia, Canada, France, Germany, Japan and the UK, with plenty more countries coming by the end of the year. Press info can be found after the jump.

[Thanks to everyone who sent this in]
Show full PR text

CUPERTINO, California-October 17, 2011- Apple® today announced it has sold over four million of its new iPhone® 4S, just three days after its launch on October 14. In addition, more than 25 million customers are already using iOS 5, the world's most advanced mobile operating system, in the first five days of its release, and more than 20 million customers have signed up for iCloud®, a breakthrough set of free cloud services that automatically and wirelessly store your content in iCloud and push it to all your devices. iPhone 4S is available today in the US, Australia, Canada, France, Germany, Japan and the UK, and will be available in 22 more countries on October 28 and more than 70 countries by the end of the year.

"iPhone 4S is off to a great start with more than four million sold in its first weekend-the most ever for a phone and more than double the iPhone 4 launch during its first three days," said Philip Schiller, Apple's senior vice president of Worldwide Product Marketing. "iPhone 4S is a hit with customers around the world, and together with iOS 5 and iCloud, is the best iPhone ever."

iPhone 4S is the most amazing iPhone yet, packed with incredible new features including Apple's dual-core A5 chip for blazing fast performance and stunning graphics; an all new camera with advanced optics; full 1080p HD resolution video recording; and Siri™, an intelligent assistant that helps you get things done just by asking.

In this article: apple, att, ios, ios 5, Ios5, iphone, iphone 4, iphone 4s, Iphone4, Iphone4s, mobilepostcross, sales, sprint, verizon
All products recommended by Engadget are selected by our editorial team, independent of our parent company. Some of our stories include affiliate links. If you buy something through one of these links, we may earn an affiliate commission.
Share
Tweet
Share