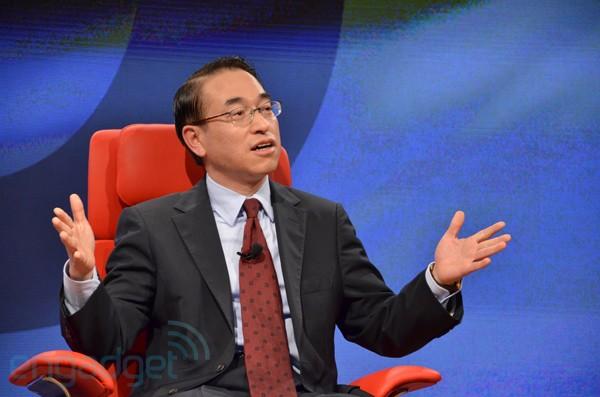 Well, so much for that. Samsung's Executive Vice President of Product Strategy -- Won-Pyo Hong -- didn't say a whole heck of a lot on stage here at AsiaD, but he did clarify one thing near the end of his interview: he has 'no idea' where those earlier rumors came from. With "those rumors" regarding the matter of designing the Galaxy Nexus specifically to avoid patent troubles with Apple. According to Dr. Hong, the actual development of the Galaxy Nexus started with Google before the initial lawsuit hammer fell between the two outfits, making it impossible for the suits being flung back and forth today to have any impact on that decision.

We believe it. These phones are designed months -- if not years -- in advance, and the actual process from concept to shipping takes a relative eternity. Furthermore, the original source (linked in More Coverage) only tied the quotes from Sammy's Shin Jong-kyun loosely to the Galaxy Nexus, and we're guessing that Samsung takes a look at all potential legal implications before shipping any product. In other words, the company's probably doing everything it can -- including paying Microsoft for every single Android device sold -- to avoid these nasty legal battles, but the Galaxy Nexus wasn't engineered just to sidestep another fight with the lawyers in Cupertino. And now you know.

Update: In response to a question from Joanna Stern regarding Samsung's rethinking of hardware and software (mainly TouchWiz) in order to lessen its chances of being sued in the future, Dr. Hong did muster a very vague affirmation that a newer build of TouchWiz will eventually surface, and that it'll almost certainly be tweaked in a way that'll cause Apple's lawyers to salivate less.
In this article: all things d, AllThingsD, android, apple, asiad, asiad 2011, Asiad2011, breaking news, galaxy nexus, GalaxyNexus, intellectual property, IntellectualProperty, lawsuit, legal, litigation, mobile, mobilepostcross, patent, samsung, sue, suit, Won-Pyo Hong, Won-pyoHong
All products recommended by Engadget are selected by our editorial team, independent of our parent company. Some of our stories include affiliate links. If you buy something through one of these links, we may earn an affiliate commission.
Share
Tweet
Share