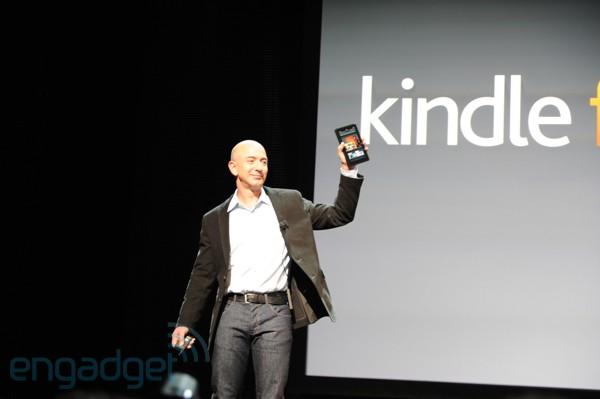 Today's Amazon earnings were decidedly split -- the company revealed both a 44-percent increase in net sales and a 73-percent decrease in net income. So, why the discrepancy? It may at least partially be due to the much discussed suggestion that the company actually loses money for each Kindle sold -- a trend which, if true, has likely only been compounded by the release of the uber-cheap ad-supported version of the device. The company addressed the matter in part, suggesting that it is focused on "the lifetime value [of the Kindle], not just the economics of the devices and accessories." The total economic picture of the Kindle includes the device itself, accessories, downloaded content and ad-revenue.

Things are apparently looking up for the company, as well, with Amazon anticipating "a record quarter in terms of device sales" for Q4. The positivity is a reflection, in part, of greater than anticipated Kindle pre-orders. Says CEO Jeff Bezos, "In the three weeks since launch, orders for electronic ink Kindles are double the previous launch. And based on what we're seeing with Kindle Fire pre-orders, we're increasing capacity and building millions more than we'd already planned."
In this article: 2011, amazon, amazon kindle, AmazonKindle, earnings, financial, financial results, FinancialResults, financials, kindle, kindle fire, KindleFire, Q3, q3 2011, Q32011, quarterly, quarterly earnings, QuarterlyEarnings
All products recommended by Engadget are selected by our editorial team, independent of our parent company. Some of our stories include affiliate links. If you buy something through one of these links, we may earn an affiliate commission.
Share
Tweet
Share