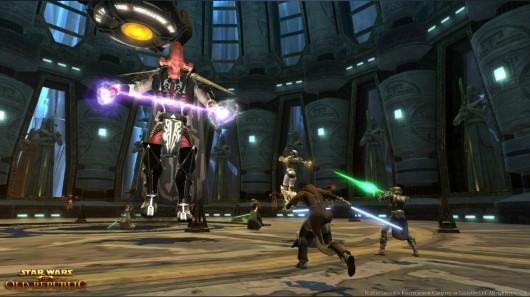 The blog Sith Inquirer wrote in to BioWare to, well, inquire about Star Wars: The Old Republic's Sith Inquisitor class story and received a response from none other than head writer Daniel Erickson.

In the interview, Erickson said that the story for the Sith Inquisitor was entirely written by Rebecca Harwick, who drew inspiration from Emperor Palpatine as well as Alex Freed's Blood of the Empire series. Inquisitor players will begin their saga by investigating "forgotten regions" on different worlds as they look for the secret of ancient Sith power.

The team had a few issues writing around Purebloods being portrayed as slaves, although this was ironed out as BioWare placed a priority on allowing players to pick the race they wished. the class is being voiced by Euan Morton (male) and Xanthe Elbrick (female).

Will there be plenty of backstabbing, political or otherwise, as part of the storyline? "More than you can possibly imagine," Erickson replies.

When it comes to the Sith Inquisitor's companions, Erickson tantalized fans by saying, "Khem has one of the most amazing storyline developments for a companion and the (as yet unseen) Inquisitor romances are not your normal fare at all."
In this article: alex-freed, alexander-freed, bioware, blood-of-the-empire, daniel-erickson, Euan-Morton, khem, pureblood, pureblood-sith, purebloods, Rebecca-Harwick, sith, sith-inquisitor, sith-sorcerer, sith-sorceress, star-wars-the-old-republic, swtor, the-sith-inquirer, Xanthe-Elbrick
All products recommended by Engadget are selected by our editorial team, independent of our parent company. Some of our stories include affiliate links. If you buy something through one of these links, we may earn an affiliate commission.
Share
Tweet
Share