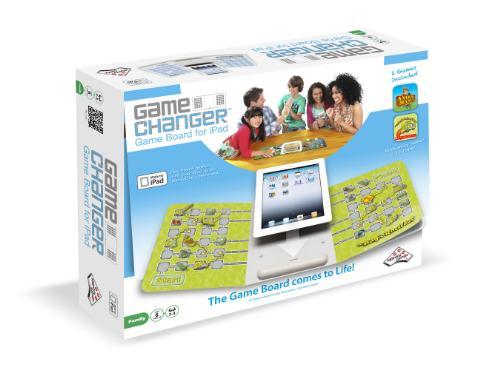 All joking aside, GameChanger is actually pretty neat. It's a combination iPad dock and playing board that isn't limited to a single game. The Apple slate becomes an integral part of play, where you spin a virtual wheel to determine how many spots to move while the app tracks your progress. The board itself comes with different skins (two at the moment: The Magic School Bus and Animal Mania) that have their own particular set of animations, questions and tasks when you select the title from the free GameChanger app. There's no dice or cards to lose, but you might be wishing for bits of plastic and cardboard when a sore loser tosses your tablet across the room. GameChanger is available now for $80 and a few more details can be spied in the PR after the break.
Show full PR text
The Evolution of the Board Game Is Upon Us!

ROTTERDAM, Netherlands, Nov. 1, 2011 /PRNewswire/ -- Just in time for the holidays, Identity Games – an international award-winning game creator, producer and publisher - introduces a true "game changer" to the board game category. Presenting GameChanger™ – a groundbreaking innovation in game play. GameChanger is an electronic game board that works with the iPad. Featuring interactive animation and sound, GameChanger adds a whole new dimension to the traditional board game by creating a different experience every time you play.

The GameChanger, which is an app-based accessory "Made for iPad," is very simple and easy to use. Kids are given the option of playing two different games; The Magic School Bus® from Scholastic or Animal Mania. The iPad simply slides into the GameChanger cradle, and one of the included game skins can be placed on top of the board. Parents can download the App, which is free with GameChanger purchase, and then the family fun can begin!

"The GameChanger is going to revolutionize traditional board game play," said Emile Kalis, Creative Director, Identity Games. "By bringing together the best of both worlds – board games and the world's number one tablet, GameChanger offers an entirely new gaming experience for the family that is both fun and educational."

With GameChanger, the electronic game board and the iPad screen become one, and come alive with a simple touch. The game pieces themselves interact with the iPad, which asks questions and assigns tasks, so players always know whose turn it is. A "spin" of the wheel on the iPad lets players move their pawn across the game board. Since the game board and the iPad are connected, all game play is completely guided and tracked.

In The Magic School Bus® game, which is celebrating its 25th anniversary this year, kids can join Ms. Frizzle and her class as they play, learn and discover through fantasy and science. As young ones move across the game path, they will travel and see the world, learning fun facts through different video clips and questions. In the Animal Mania game, it's a crazy animal mad house! Young explorers will travel the world across different continents and time periods, learning about animals, their habitats and behavior. Kids will meet mammals, sea creatures and even prehistoric dinosaurs as different animals challenge them along the game path. With trivia questions, fun tasks and entertaining riddles, young explorers will learn about animals in a whole new way.

The GameChanger comes with the electronic game board, four game skins (Scholastic's The Magic School Bus and Animal Mania), four game pieces and free App download. It is recommended for children ages 6 and up, and has a suggested retail price of $79.99. It will be available beginning on November 1, 2011 at retailers including Toys"R"Us, Apple Stores and Amazon.com. Additional games will soon be available, including Kaboom and DuckDuckGoose. For additional information, visit www.boardgamechanger.com.

The company was founded in 1992 and specializes in personalized games for B2B, for consumers and distributors worldwide. The mission of Identity Games is to make innovative, creative and educational games for every business, family and market and exceed customer expectations by delivering high quality games at the best possible prices.

About The Magic School Bus®

Based on the best-selling Scholastic book series written by Joanna Cole and illustrated by Bruce Degen, The Magic School Bus is an Emmy Award-winning animated television series that has been seen in 39 countries in 16 languages. Now in its 17th season, it currently airs on the Qubo Channel in the United States. With more than 58 million books in print, the brand has won numerous industry excellence awards, including two Emmys for Lily Tomlin (for her portrayal of Ms. Frizzle in the TV series), five CINE Golden Eagles, a Parent's Choice Gold Medal, a National Conservation Achievement Award, an Environmental Media Association Award, and an Annenberg Public Policy Center Award. Two The Magic School Bus book apps are available for the iPad™ and a live show entitled "The Magic School Bus Live: THE CLIMATE CHALLENGE" launched in October.
In this article: animal mania, AnimalMania, app, apple, apps, board game, board games, BoardGame, BoardGames, game, gamechanger, games, Identity Games, IdentityGames, ios, ipad, magic school bus, MagicSchoolBus, the magic school bus, TheMagicSchoolBus, toys
All products recommended by Engadget are selected by our editorial team, independent of our parent company. Some of our stories include affiliate links. If you buy something through one of these links, we may earn an affiliate commission.
Share
Tweet
Share