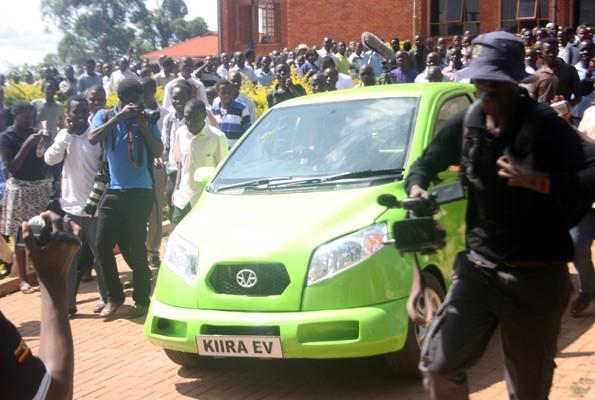 Take a good look at that lime green hornet pictured above, because it may just herald the dawn of a new era in Ugandan transportation. Known as the Kiira EV, this plug-in was designed by students at Makerere University in Uganda, where electric cars, as you might imagine, are something of a rare commodity. In fact, local media outlets are heralding the Kiira as the first EV ever produced within the central African country, and it's not too shabby, either. On Tuesday, after nearly three years of development, the two-seater successfully completed its first test run, reaching a top speed of 65 kilometers per hour and nimbly making its way up a 55-degree incline. According to Paul Isaac Musasizi, who oversaw the project, the Kiira is capable of maxing out at a speed of 150 kilometers per hour, and can run for up to 80 kilometers on a single charge. Aside from its steering wheel and other accessories, every other component was designed and constructed domestically.

Perhaps more important than the Kiira EV's specs, however, is what it symbolizes for Uganda. "When we started the project, we wanted to demonstrate that Uganda has as good talent as that in the US or Germany," Musasizi told Uganda's Daily Monitor. "Now that this is over, we expect and want it to be taken up." It remains to be seen whether the Kiira actually enters production anytime soon, but Musasizi says his team is already working on a 28-seat EV for public transportation, underscoring their commitment to bringing green technology to their country. Hum past the break to see video of the momentous occasion, along with coverage from Uganda's NTV.

In this article: africa, eco friendly, EcoFriendly, electric vehicle, ElectricVehicle, environmentally friendly, EnvironmentallyFriendly, EV, first, green, kiira EV, KiiraEv, lithium ion, lithium ion battery, LithiumIon, LithiumIonBattery, Makerere University, MakerereUniversity, milestone, plug in, PlugIn, uganda, video
All products recommended by Engadget are selected by our editorial team, independent of our parent company. Some of our stories include affiliate links. If you buy something through one of these links, we may earn an affiliate commission.
Share
Tweet
Share