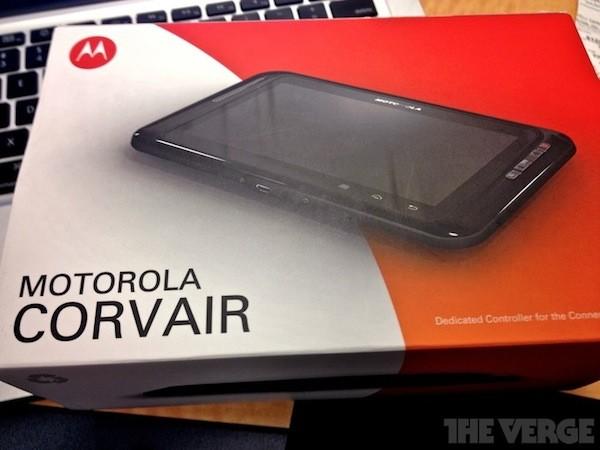 There are plenty of WiFi-connected remote control apps for tablets, dongles for IR control and even an IR blaster built into Vizio's tablet, but here's a Motorola slab purpose-built for the coffee table. The Verge has received several pics of the Motorola Corvair (and its packaging), a "dedicated controller for the connected" ...something, which is apparently in testing with unnamed cable companies right now. It's a 6-inch tablet running Android 2.3, that the box shows working as a remote control and apparently mirroring its display on the TV screen. Other notes indicate it's optimized for low cost, packs a healthy 4,000mAh battery, and can communicate with other devices via IR or Zigbee's RF4CE spec (where's Android@Home?). That would line it up perfectly to tie in with home automation systems like the one Motorola and Verizon just launched, as well as potentially provide a sweet platform for content discovery. The only downside? Unless Moto goes against type, this will probably never see retail and we'll have to wait on our cable company to figure out a way to charge extra for one and slap their own ugly software on it -- here's hoping that's not the case.
In this article: android, android 2.3, Android2.3, cable, cable box, CableBox, corvair, gingerbread, google, hdpostmini, home automation, HomeAutomation, ir, motorola, motorola corvair, MotorolaCorvair, remote, remote control, RemoteControl, rf4ce, tablet, zigbee
All products recommended by Engadget are selected by our editorial team, independent of our parent company. Some of our stories include affiliate links. If you buy something through one of these links, we may earn an affiliate commission.
Share
Tweet
Share