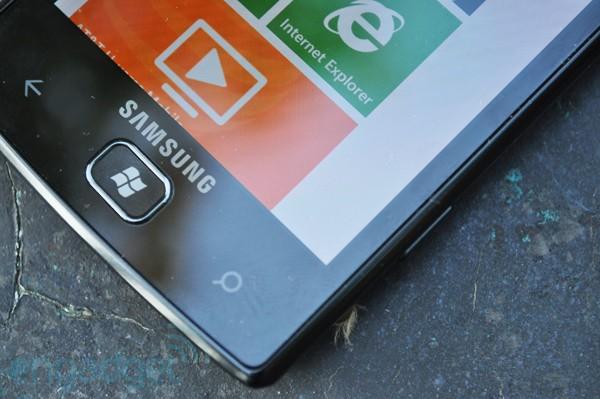 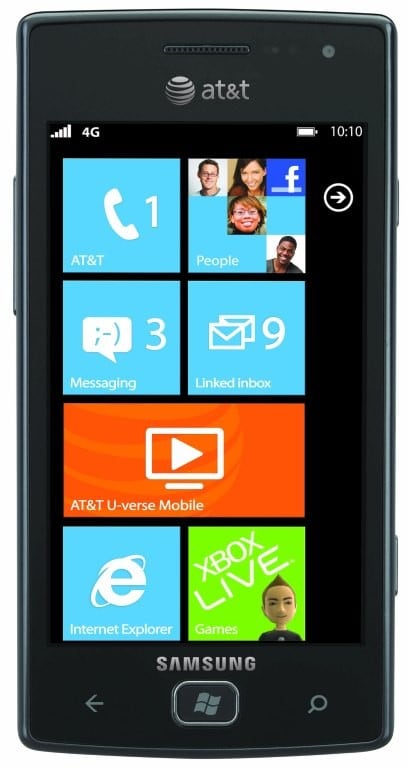 Microsoft: Windows Phone Mango now being delivered to '100 percent' of compatible devices
Samsung Focus S hands-on
Motorola Atrix 4G review
The Focus Flash is really a rather unassuming device. Sure, it packs Mango and a 1.4GHz Snapdragon, but its 3.7-inch Super AMOLED screen (no Plus here) and $49 price point aren't the sort of thing that scream "buy me" to gadget fiends and power users. In fact, since it was first announced, the Flash has been living in the shadow of its bigger brother (literally and figuratively), the Focus S. But, considering the number of similarities between the two devices (and most of WP7 handsets for that matter), is it right to regard the Flash as the runt of the litter? Is it the Windows Phone equivalent of those bargain-basement Android devices that aren't worth the paper your receipt is printed on? Obviously, we're not gonna tell you up front -- you'll have to keep reading after the break.

Despite some tradeoffs in the storage and camera departments, the modestly proportioned Focus is a worthy contender for smartphone dollar -- especially considering the price.

How would you rate the Focus Flash?
We want to hear what you think. Post a quick review now to join the conversation!
Write a review

The Focus Flash feels surprisingly nice in the hand. Though most of the body is plastic, it has a pleasant heft and there's a large swath of brushed, dark gray metal across the rear that actually makes it feel like more of a premium device than its more expensive sibling. While it's not the thinnest phone on the block, it's certainly not a heffer at 0.41 inches thick. The rounded trapezoid profile also feels quite natural to grip, providing just enough slope to cradle effortlessly in your palm. Just above that pleasant expanse of actual metal is the five megapixel camera and LED flash (more on that later) and the speaker phone which is serviceable, but hardly impressive.

All four sides of the device are interrupted with some form of port or button. Along the top edge is the 3.5mm headphone jack, while the bottom is home to the all-important microUSB plug -- you know for charging and syncing and stuff. On the left is the volume rocker, which doesn't have much travel, but is surprisingly clicky and sturdy. The same can be said about the power button on the right, which depresses with a satisfying tick. Sadly, the camera button, while it does provide some resistance feels significantly less robust (again, more on that later). There's also the trio of buttons up front. The physical Windows key is a nice touch and is flanked by the search and back buttons, both of which are capacitive. The two touch-sensitive keys seemed a tad too responsive in use. Simply brushing our fingers in the general vicinity of the search key was more than enough to launch Bing. This turned out to be particularly frustrating when trying to take a photo since our thumb naturally wanted rest right on top of it.

Obviously, the part of the phone you'll be interacting with the most is the screen. At 3.7 inches and only 800 x 480 the display isn't exactly lust worthy in the specs department. Thanks to Windows Phone 7's blocks of solid color and stark, straight lines you'll barely miss the extra pixels found on handsets running other OSes. In fact, the Super AMOLED panel does a great job of highlighting the beauty of Metro's minimal design, even if it does lend everything a slightly bluish tint, likely thanks to its pentile matrix. The only spec that had us scratching our heads was the paltry 8GB of storage. Sure, this is a budget device, but without the ability to expand via microSD, any media mavens will chew through the available space in no time at all.

Powering this petite Mango phone is a single-core, second-gen Snapdragon clocked at 1.4GHz. The Adreno 205 GPU that accompanies it is getting a little long in the tooth at this point and certainly can't keep pace with the likes of the iPhone 4S. It's not a huge deal, however, Metro doesn't require a ton of power to run smooth as silk and there aren't many games in the Marketplace that call for serious polygon pushing. In fact, Microsoft has spent so much time optimizing its mobile OS for this particular chip that while Android might balk at such a puny processor, Mango runs with nary a hiccup. In WP Bench the Flash scored a respectable 92.15 -- not quite as high as the Titan (96), but definitely an improvement on the Lumia 800 (86). And it should run circles around the similarly budget-minded HTC Radar which sports only a 1GHz CPU. SunSpider scores also fell right in between the Lumia and Titan, clocking in at 6,842ms -- only 300ms behind the 4.7-inch beast, but almost twice as slow as the iPhone 4 (not the 4S).

The relatively tiny 1,500mAh battery is a bit of a let-down. It managed to make it through a day of relatively heavy usage, including a decent amount of web browsing, photo taking and app installing, and will probably cruise into the following morning under more moderate usage. But that's it -- expect to charge the Focus Flash everyday. And knowing how quickly some of you (OK, us) can wear down one of these lithium ion packs, don't be surprised if you have to keep the charger in your bag six months down the road. Then again, it did last just shy of four hours (three hours and 55 minutes, to be exact) in the WP Bench battery test, where as the Lumia 800 only managed two hours and forty minutes and the Titan dropped dead at three hours.

The five megapixel shooter on the back isn't going to win any awards. It's passable for the occasional snapshot, but we'd keep a hold of our dedicated digicam if we were you. It took decent pics in daylight and cranking up the contrast and saturation in the settings produced surprisingly vivid, if somewhat unnatural looking images. Low light performance, however, left something to be desired. Photos were practically pitch black outdoors at night, even with the aid of some artificial light, and the flash completely washed out anything closer than six feet away. The cam didn't fare much better indoors, under fluorescent lighting. The camera had a tough time focusing and colors appeared oddly muted. The 1.3mp cam up front should be fine for some informal video chatting, but the noisy, flat images it captured wouldn't even pass muster on a MySpace page.

Video is also nothing to write home about. Though the camera technically captures 720p clips, the results are noisy (both in terms of image quality and audio) and heavily compressed. A 30-second video we took outside one the Engadget satellite compounds came in at 52.3MB. Every tiny shift in position resulted in some serious wobbling in the image, and forget about moving around -- every step we took while recording had the frame bouncing around like a kid in an inflatable castle. Though you can clearly hear yourself talking in clips, background noise is a serious issue. Even a mild gust of wind is enough to produce overpowering blasts of noise.


Perhaps the biggest let-down, though, was the dedicated camera button. Honestly, we were really excited to see a button whose sole purpose is to focus and take snapshots, but then we actually used it. It doesn't have the same satisfying click as the other hardware buttons. It does put up plenty of resistance, but it may be a tad too much. The button is slightly more recessed than others and required more force to press than anticipated, resulting in just enough motion to knock many images out of focus. On the plus side though, shutter lag is almost nonexistent. It wasn't quite as fast as the Galaxy Nexus, but certainly put the rest of the Android flock and the iPhone family to shame.

There's not much new on the software front. If you've seen Mango, well, you've seen Mango. All the things we love (notifications!) and loathe (lackluster sync support for third-party services) about Microsoft's second iteration of its mobile OS are present and accounted for. Of course, both AT&T and Samsung had to stick some of their own wares on the device. Chances are you'll never have to see them outside of their icons in app menu. The Samsung Now app isn't actually terrible. It's a simple news and weather aggregator, with a live tile that puts current temperature and conditions on your home screen. Of more interest, at least to some, will be the Samsung Photo Studio -- a Hipstamatic like app that lets you add retro effects to images and capture panoramic shots.

The Ma Bell apps, on the other hand, are a bit less compelling. AT&T Navigator is, more or less, the same subscription-based GPS app you've probably never even considered a real option, the U-verse app is a great way to watch some TV content (most of it quite terrible) while you're on the go and AT&T Radio is yet another pay-to-stream "radio" app. On the plus side, every piece of bloatware that ships with the device is easily uninstalled.

The Focus Flash isn't going around begging for attention. Simply put, its specs aren't going to draw in the hardcore gadget crowd and no one is going be camping out overnight to get their hands on one. That said, we could easily see this being a sleeper hit. At only $50 with a two-year contract it should snag a few second glances from those who might otherwise be eyeing a budget Android handset or perhaps even an iPhone 3G S. The screen, though not the highest-res panel out there, is bright and beautiful, and Mango hums along without a hitch on the 1.4GHz CPU inside (and smooth operation is something many of those other bargain handsets can't boast about).

The Focus isn't meant for the mobile warriors out there who don't bat an eye at dropping $200 on a phone. It's a smartphone for a less demanding crowd that simply wants to check their email, do some web browsing and keep tabs on their social networks. The Focus excels in these areas, and does so while feeling nicer in your hand than many of its more expensive competitors. You'll make some sacrifices on the camera, storage and battery fronts, but if you can live with that the Focus is a veritable steal.
In this article: 1.4Ghz, att, focus flash, FocusFlash, i677, mango, Microsoft, mobilepostcross, review, samsung, samsung focus flash, samsung sgh-i677, SamsungFocusFlash, SamsungSgh-i677, sgh-i677, snapdragon, video, windows phone, windows phone 7, windows phone 7.5, windows phone mango, WindowsPhone, WindowsPhone7, WindowsPhone7.5, WindowsPhoneMango, wp7
All products recommended by Engadget are selected by our editorial team, independent of our parent company. Some of our stories include affiliate links. If you buy something through one of these links, we may earn an affiliate commission.
Share
Tweet
Share