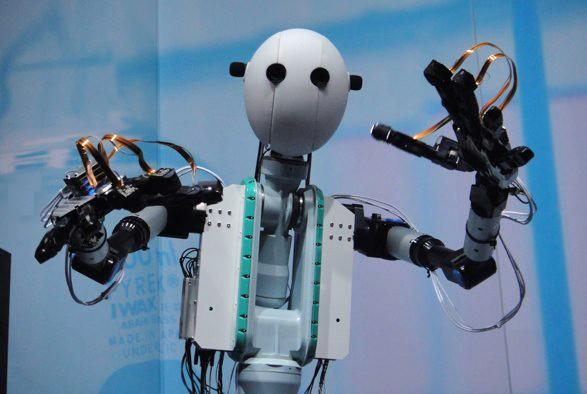 The esoteric art of telepresence is all about that sweetest of dreams: being somewhere you'd rather be. So far, though, it's hardly teleported much beyond our head movements and kisses. What we really need is a fully-fledged avatar that can also feed sensory information back to us -- and that's exactly what the Telesar V claims to be. The user dons a pair of VR goggles that control the robot's head and see through its eyes. A pair of gloves not only control the Telesar's hands, but also transmit force and temperature data back from its sensors. Drag yourself away from that violent BF3 simulator and check out the smoochiness after the break. (And yes, the inventor's surname is just about perfect.)

In this article: avatar, goggles, japan, japanese, Keio University, KeioUniversity, Professor Tachi, ProfessorTachi, sensation, sensor, sensors, sensory, Tachi, telepresence, telesar, Telesar V, TelesarV, telexistence, virtual reality, VirtualReality, VR, VR gloves, VR goggles, VrGloves, VrGoggles
All products recommended by Engadget are selected by our editorial team, independent of our parent company. Some of our stories include affiliate links. If you buy something through one of these links, we may earn an affiliate commission.
Share
Tweet
Share