M. Gorman
@Numeson
November 8th, 2011
In this article: external ssd, external storage, ExternalSsd, ExternalStorage, intego, intego backup manager pro, IntegoBackupManagerPro, lacie, little big disk, little big disk thunderbolt, little big disk thunderbolt ssd, LittleBigDisk, LittleBigDiskThunderbolt, LittleBigDiskThunderboltSsd, review, solid state drive, solid state drives, solid-state drive, Solid-stateDrive, SolidStateDrive, SolidStateDrives, ssd, ssds, storage
Thunderbolt's the newest kid on the connection block, and its greased-lightning transfer rates make for an awfully attractive alternative to USB and FireWire for those who move big chunks of data on the regular. Despite its many advantages, it's still in its infancy, so there are few peripherals supporting the 10Gbps interface. LaCie's Little Big Disk Thunderbolt SSD is among the first to make use of Apple and Intel's new data superhighway, and it pairs a couple of 2.5-inch, 120GB Intel 320 series SSDs in RAID 0 configuration to take full advantage of all that bandwidth. But, such speed comes at a hefty cost: $899.95 when it goes on sale later this month. Is it as quick as they say? Is it worth the money? There's only one way to find out, so let's see how the latest Little Big Disk handles itself, shall we?
%Gallery-138735%
LaCie 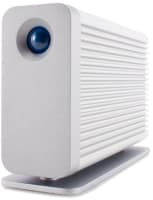 
Like many of LaCie's other external storage devices, the new Little Big Disk (LBD) has a ribbed aluminum shell and glowing blue orb on the front that serves as both a power button and drive activity indicator. There's a matching aluminum stand that slides onto the bottom, and around back you'll find a duo of Thunderbolt ports, the power plug and a Kensington lock. Along with the drive itself, you get a power brick, a utilities disc with Intego Backup Manager Pro software onboard and not much else. Unfortunately, you'll have to purchase the necessary Thunderbolt cable separately, but at least it comes with a smattering of plug adapters so world travelers can use the LBD wherever they go.

Hooking the drive up is a snap. Simply plug in the power cable, connect it to the Thunderbolt port on your MacBook Pro and let the data flow. We also connected a monitor with a DisplayPort adapter to the LBD, and the video pass-through functionality worked flawlessly from the jump. The drive has quite a small footprint, as it measures just 1.6 inches wide, 5.5 deep and 3.3 inches tall, so odds are there's room for it on even the most cluttered desks. Though you may not be so keen to have it there, as the fan keeping those dual SSDs cool does make a fair bit of noise. Not as loud as a laptop when the fan kicks on at full bore, but it's a noticeable sound that doesn't stop while the drive is powered on.

We put the Little Big Disk through the ringer using our MacBook Pro running OS X 10.6.8, a 2.3 GHz Core i7, and 8GB of RAM. We were told to expect read speeds of 480 MB/sec and write speeds of 254 MB/sec, and indeed we got pretty close to those numbers in our testing -- we regularly saw 470 MB/sec reads and 250 MB/sec writes using the Blackmagic disk speed test. Those speeds translated to a 200MB file being transferred in 2.5 seconds, a 1GB file in 12 seconds, a 5GB file in 57 seconds and a 10GB file in just under two minutes. We also backed up 89GB worth of data using using Time Machine in 23 minutes and 22 seconds, and created a bootable backup using the included Intego software in 38 minutes and five seconds at an average speed of 41.8 MB/sec. Needless to say, the Little Big Disk takes our usual external storage device -- a Western Digital My Book using USB 2.0 -- to the woodshed when it comes to writing and recording bits and bytes.

Intel: Thunderbolt coming to PCs, prototype shown at IDF 2011
Intel Thunderbolt: a closer look
Apple and Intel unveil Thunderbolt I/O technology
Because the drive comes as a RAID 0 setup, we planned to run similar tests in RAID 1, as the drive supports it and not everyone is comfortable keeping their most sacred files in a RAID 0 array. Unfortunately, we ran into some troubles after running a 7-Pass erase on the drive using the Mac OS X Disk Utility and were unable to reformat the LBD into a RAID 1 configuration. We've been in touch with LaCie about the issue, and will update this review with the new numbers once we're able to get things squared away.

Update: After speaking with the folks at LaCie, it turns out that erasing the Little Big Disk -- particularly with a secure wipe like we performed -- can confuse the GUI on Disk Utility and render it unable to reconfigure the LBD. However, we were able to break the RAID using OS X Terminal and then reformat the drive into RAID 1 using Disk Utility. After doing so, we found that the drive performed the 200MB, 1GB, 5GB and 10GB file transfers in the same amount of time as when the drive was in RAID 0. Backups, however, took a little longer than before. Our Time Machine backup took just under 30 minutes, and we were able to create a bootbable backup with Intego in 41 minutes at a rate of 29.8 MB/sec. As expected, speeds from the Blackmagic Disk Speed Test were also slower: 127.4MB/sec writes, and 423.9 MB/s reads.


The included backup software from Intego is a flexible tool that's easy to use. Once you've installed the software from the included CD, customizing it to suit your needs is a painless process. There's a standard tool that allows you to select individual files and folders, and you can schedule backups, create rules and exceptions to handle files the way you want. You can even set your system to sleep or un-mount the drive once it's finished safeguarding your data. Of course, the software also lets you create a bootable backup of your system and set up synchronization of folders as well. It's a comprehensive suite, and one we could see ourselves using regularly.
%Gallery-138740%

All in all, the LaCie Little Big Disk Thunderbolt SSD performs as advertised. You get crazy fast transfer rates thanks to the Thunderbolt interface and dual SSDs in RAID 0 configuration. LaCie's marketing the drive to those who create audio and video content (there's a 'Professional SSD' label on the box, after all). And, we figure there will be plenty of folks who'll gladly pay the $900 entry fee to move massive chunks of data at breakneck pace. For those who aren't? Well, as drool-inducing as those speeds may be, we just can't see many consumers spending so much on a device they'll use as a repository for backup files. But, if you've got cash to burn and a need for speed, the Little Big Disk Thunderbolt SSD may be just what the doctor ordered.
All products recommended by Engadget are selected by our editorial team, independent of our parent company. Some of our stories include affiliate links. If you buy something through one of these links, we may earn an affiliate commission.