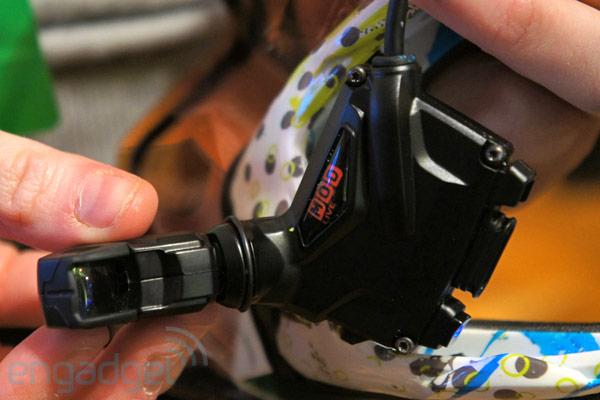 Straight out of Q's closet of goodies are Recon Instrument's brand new MOD and MOD Live ski goggles, giving bikers, skiers and snowboarders a glimpse into the digital extreme with a tiny built-in LCD micro display -- powered by an itsy bitsy Android ARM Coretex-A8 600 MHz computer. The 428 x 240 WQVGA screen allows the hardcore to tune into things like speed, jump analytics, distance, pre-loaded trail maps, height and GPS location, while keeping MOD Live users connected to calls and texts via Bluetooth. Running Android 2.3, the LIVE variety will let you see who's calling, answer calls, receive texts and even respond to them with pre-programmed responses. Users can switch between screens using the included remote, attachable via wristband or headstrap. Since the display is so tiny, the amount of Android apps athletes will be able to use will be limited -- so, sorry kids, no Angry Birds while mountain biking off a cliff.

If that doesn't sound distracting enough, the manufacturer promises future third-party camera and video recorder integration to capture all the jumps, dives and spills associated with shredding the gnar. Sadly, the current model only has 512Mbs of storage and 256MB of RAM, so you won't be able to store too many Sean White-worthy feature films on them.

Giving these bad boys a go, they transported us into what seemed like the future with details of our personal best performances staring us in the eye from the corner of the screen -- rad. Flexible and bendy, the eye shield easily pops out of the frame to reveal the display itself, along with the computer's guts. Of course, the extreme flexibility and bulkiness of the goggles doesn't bode well for those of us who actually use goggles to protect our eyes -- giving us the impression that they would not offer much cushion with a severe spill. The enviable eyewear will retail for $299 with the Android smartphone-connected version available for $399. Check out the video and full PR after the break.

The Android-based MOD Live ships with four new, industry first applications: Buddy Tracking, Smartphone Connectivity, a Navigation app pre-loaded with the largest database of trail maps in the world, Music Playlist Mode, and Camera Connectivity for use in the future with select wireless point-of-view action cameras.

"The transition to modular based optics allows us to expand our reach exponentially," said Darcy Hughes, Chief Marketing Officer, Recon Instruments. "The snap-fit design, Bluetooth interaction, combined with the ever-evolving Android platform, is a game changer for the action sports industry in terms of connectivity, real-time information direct to eye, and community sharing."

Recon's HQ Online community extends your Alpine experience after a day on the slopes, with sharing, bragging, and exploring everything the mountain had to offer long after your day is over. Skiers and riders can re-live and learn from their trips and runs, add images and video to create a highlight reel to share with other community members or with friends and family via Facebook and Twitter.

Other new features this season include a fasten-anywhere Bluetooth remote control, 33% larger widescreen optics, and an adjustable optics arm for a truly custom fit. Recon Ready goggles are already available from Uvex, Briko, Alpina, and Zeal Optics, with several more leading goggle brands scheduled to come onboard this winter and spring.

MOD and MOD Live are available now for $299 and $399 MSRP respectively at leading sporting goods retailers like REI, Sport Chalet, Mountain Equipment Co-op, and online at Amazon, www.sportinglife.ca and more.
In this article: android, android 2.3, Android2.3, app, apps, ARM Coretex-A8, ArmCoretex-a8, bluetooth, display, displays, extreme, goggles, google, hands-on, mod, mod live, ModLive, recon instruments, ReconInstruments, ski, sport, sports, video, wqvga
All products recommended by Engadget are selected by our editorial team, independent of our parent company. Some of our stories include affiliate links. If you buy something through one of these links, we may earn an affiliate commission.
Share
Tweet
Share