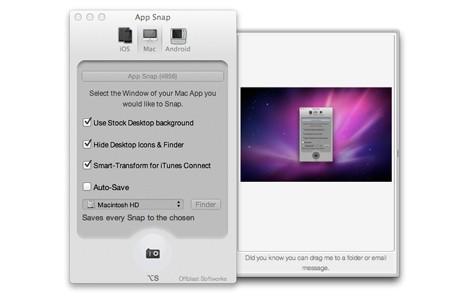 Taking screenshots on Mac OS is easy thanks to its decent built-in capture utilities, but taking nice ones is not as simple as you might think. App Snap is a developer-orientated screenshot utility that makes taking screenshots for app display a bit easier to manage.

It's not just handy for developers, the utility is great for anyone who regularly takes screen captures of application windows, whether it's in an iOS or Android simulator or just regular desktop Mac apps.

App Snap does what most other capture utilities will do, takes an image of the window of the app in question. Where it really shines is in the ability to quickly create aesthetically pleasing captures without having to mess around clearing your desktop and worrying about image sizes or aspect ratios. Once you've captured your window, App Snap will place the capture on an App Store orientated background, in this case the default desktop wallpaper at the right size and ratio for submission to Apple. It automatically obscures finder and anything else you might have on your desktop and gives you a nice clean App Store-ready capture in one click.

In writing up these Daily Mac Apps, I often fight with screen capture tools with a combination of OS X's built-in tools, SnagIt and Skitch, aided by BackDrop to obscure the rubbish I have littering my desktop. App Snap has replaced all those apps with one click for US$0.99

If you're an developer for the Mac or iOS app stores, or even the Android Market, then App Snap could be a great addition to your workflow that takes the hassle out of screen captures.

In this article: App Snap, AppSnap, Daily Mac App, DailyMacApp, developers, Mac, Mac App Store, MacAppStore, review, screen capture, ScreenCapture, utilities
All products recommended by Engadget are selected by our editorial team, independent of our parent company. Some of our stories include affiliate links. If you buy something through one of these links, we may earn an affiliate commission.
Share
Tweet
Share