Foursquare adds NFC support for Android 4.0, wants to touch base 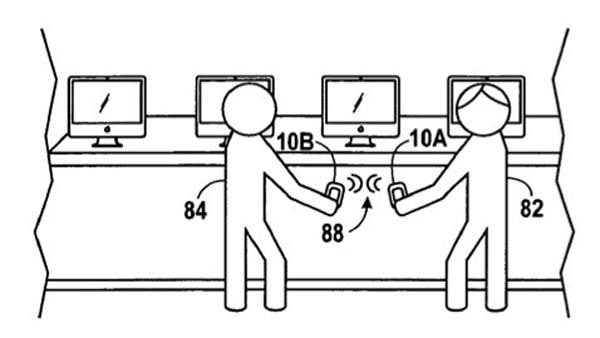 Two things that are guaranteed to mess with your brain: playing the oboe and reading dense Apple patent applications. You do find the occasional gem, but often you'll read scores of pages only to discover that the so-called invention has already been put to use by others. In this instance, Apple has successfully patented the idea of using NFC to establish a master/slave relationship between two smartphones, as a prelude to making a fully-fledged WiFi connection that allows the sharing of contact details or more complicated sequences of actions. Now, this is a smart idea, especially since the patent specifically talks about retail applications (shown above), but is the end result so wildly different to Android Beam or even Bump? Even Fujitsu came up with a similar concept for using NFC to trigger location-relevant workflows. Either there's some significant overlap here, or we've spent too long playing reed instruments.
In this article: android beam, AndroidBeam, apple, contact sharing, ContactSharing, cupertino, granted, granted patent, GrantedPatent, mobilepostcross, NFC, patent, patent application, patent applications, PatentApplication, PatentApplications, retail, United States Patent and Trademark Office, UnitedStatesPatentAndTrademarkOffice, USPTO, workflow, wow-talent-guide
All products recommended by Engadget are selected by our editorial team, independent of our parent company. Some of our stories include affiliate links. If you buy something through one of these links, we may earn an affiliate commission.
Share
Tweet
Share