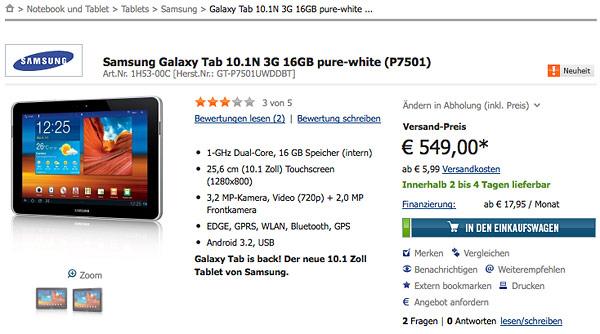 Sick of those trips across the border to smuggle a banned Galaxy Tab 10.1 into Germany? Samsung has come to the rescue, modifying its familiar Honeycomb tablet to work around the injunction issued in August and upheld in September as part of Apple's patent litigation in Düsseldorf. It's not entirely clear what's different with the relaunched tablet, which appears to have a black bezel that extends slightly further towards the metal rim, but the Galaxy Tab 10.1N, as it is now being called, has appeared on a German e-tailer's website with a shipping window of two to four days, along with the text "Galaxy Tab is back!" at the bottom of the listing. Samsung isn't entirely in the clear just yet, but unless its new "N" model is also found to be infringing on Apple's patents, gadget-hungry Germans shouldn't have to worry about the iPad-alternative disappearing again anytime soon.

Update: Samsung has just issued a statement on the modified Galaxy Tab, with some clarifications on its design changes. "The newly modified device will be renamed the Galaxy Tab 10.1N and we've made two changes to the design," spokesman Jason Kim said. "The design of the bezel has been changed and the speaker has also been relocated."
In this article: 10.1n, apple, ban, court, dusseldorf, dusseldorf regional court, DusseldorfRegionalCourt, europe, galaxy tab, galaxy tab 10.1, galaxy tab 10.1n, GalaxyTab, GalaxyTab10.1, GalaxyTab10.1n, german, germany, injunction, ipad, ipad 2, Ipad2, law, lawsuit, legal, patent, patent infringement, PatentInfringement, regional court, RegionalCourt, sales, samsung, slate, tablet
All products recommended by Engadget are selected by our editorial team, independent of our parent company. Some of our stories include affiliate links. If you buy something through one of these links, we may earn an affiliate commission.
Share
Tweet
Share