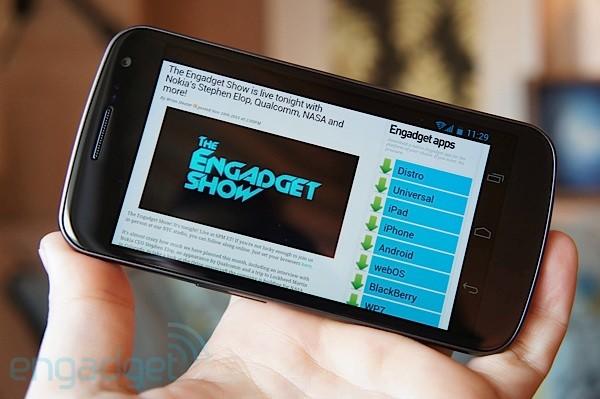 Wow... The Galaxy Nexus. It's finally here, in our eager little hands, and it's delicious -- just like Ice Cream Sandwich, in fact. Our review unit is the same unlocked HSPA+ version we briefly played with in Hong Kong and is running Android 4.0.1. We've only spent about a day with Google's newest superphone and we're already hard at work on a full review, but we wanted to share some raw, immediate, first impressions -- after the break. 
The first thing we noticed upon opening the generic white packaging is that this latest Nexus is a large phone, with a footprint similar to the HTC Titan. It's also pleasantly light and thin, and the bezel is small thanks to the lack of hardware buttons. Build quality is typical Samsung -- durable if not somewhat plasticky. The Nexus inherits design cues from its various Galaxy S II cousins, including the textured battery cover (which is a little difficult to snap back on), but sheds the usual black for a gunmetal shade of gray.

We're happy to confirm that the Galaxy Nexus is indeed the first Android device with a pentaband HSPA+ radio -- we've successfully tested both T-Mobile USA and AT&T SIMs with our handset. Hurray! Initial setup was quick and painless. We logged in with our Google ID and password, and to our surprise, the Nexus started downloading and installing all of our purchased apps (in addition to syncing our email, calendar and contacts). It also asked if we wanted to use Google+ on that account.

As expected, Samsung isn't taking any prisoners with its HD Super AMOLED display -- the 4.65-inch 1280x720 pixel screen is simply gorgeous despite using a PenTile matrix. Fonts are crisp, colors are vibrant, blacks are deep, and viewing angles are exceptional. However, we noticed an issue with the auto-brightness setting, which functions properly in daylight but is too dim in low-light environments.

It's still too early to comment on battery life, but so far we're not seeing any issues. While the Nexus feels quite snappy it isn't as mind bendingly fast as some Gingerbread devices (the Galaxy Note comes to mind). It will be interesting to see how the phone performs in our standard suite of benchmarks, assuming these run properly in Ice Cream Sandwich.

Speaking of which, the new OS version obviously brings some significant changes to the Android user experience. Gone are the hardware buttons, replaced instead with Honeycomb-like softkeys (back, home and app list). While the new UI design is now generally more attractive and coherent, it takes some getting used to. The physical menu key, for example, is superseded by a soft button featuring three vertically stacked dots. Unfortunately, this control's placement is not consistent amongst Android 4.0 apps (legacy apps gain a virtual menu button next to the other softkeys).

Then again, we're quite fond of the app list which now doubles as a pseudo task manager, and the ability to access the camera directly from the lock screen is a lovely touch (and a hat tip to HTC's Sense UI). Other tidbits include the search bar which is persistent across each of the five home screens, the clever app tray animations (pure eye candy), and the Easter egg in the "About" menu. There's one more thing we noticed immediately: multiple text sizes in the Gmail client -- at last.

We took a few pictures over the course of our first day with the Galaxy Nexus and the verdict is still out regarding the choice of a five megapixel camera vs. the excellent eight megapixel shooter that's standard fare on most of Samsung's flagship handsets. Our existing shots look decent, but the results sometimes required some tweaks to the exposure value, especially in low light. Using the camera exposed a major flaw in Ice Cream Sandwich, namely the lack of USB mass storage support (only media / picture transfer protocols are available). We can only hope this standard functionality will be restored in the very near future. (Update: Dan Morrill has spoken about the issue and confirmed that mass storage support is offered in Ice Cream Sandwich as long as the device has a removable SD card; phones with only built-in storage, such as the Galaxy Nexus, only support MTP and PTP.)

Like its predecessors, the Galaxy Nexus is shaping up to be an impressive flagship phone and Android 4.0 is a significant step forward for Google. Stay tuned for our detailed review, and until then check out our mouth-watering galleries and first impressions video above.
In this article: 1.2GHz, 1080p, 1280x720, 1GB RAM, 1gbRam, 4.65-inch, 5 megapixel, 5Megapixel, Android 4.0, Android 4.0.1, Android4.0, Android4.0.1, first impressions, FirstImpressions, Galaxy, Galaxy Nexus, GalaxyNexus, Google, Google Galaxy Nexus, GoogleGalaxyNexus, HD Super AMOLED, HdSuperAmoled, HSPA+, Ice Cream Sandwich, IceCreamSandwich, ICS, impressions, mobilepostcross, Nexus, NFC, OMAP 4460, Omap4460, preview, Samsung, Samsung Galaxy Nexus, SamsungGalaxyNexus, Super Amoled, SuperAmoled, TI OMAP, TI OMAP 4460, TiOmap, TiOmap4460, unlocked, video
All products recommended by Engadget are selected by our editorial team, independent of our parent company. Some of our stories include affiliate links. If you buy something through one of these links, we may earn an affiliate commission.
Share
Tweet
Share