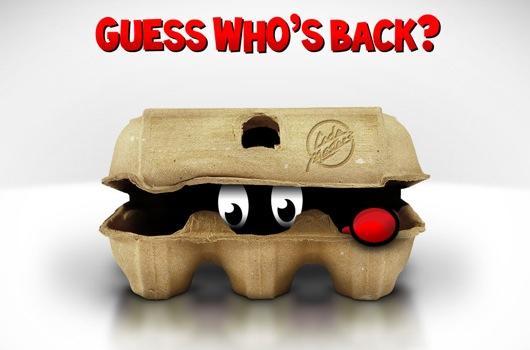 A mysterious website, "eggcitingnews.com," popped up overnight, featuring an egg carton bearing the vintage Codemasters logo, and something inside with big cartoon eyes and a red mitten. "Guess who's back?" the caption reads. The domain is owned by Codemasters.

This all appears to be leading up to the return of Codemasters' one-time franchise character, Dizzy. While Dizzy was most prominent in America as the star of a few unlicensed NES games published by Camerica, including two for the Aladdin Deck Enhancer, the walking egg was genuinely popular in Europe. His games are essentially adventure games, involving wandering around 2D landscapes, solving puzzles, and saving the "Yolkfolk."

It's unclear from this teaser site exactly what Codies has planned. It could be as simple as a GOG-style re-release, or it could be an HD remake of a Dizzy game, or even a completely new game. We just can't glean much information from a picture of an egg carton.
In this article: adventure, codemasters, dizzy
All products recommended by Engadget are selected by our editorial team, independent of our parent company. Some of our stories include affiliate links. If you buy something through one of these links, we may earn an affiliate commission.
Share
Tweet
Share