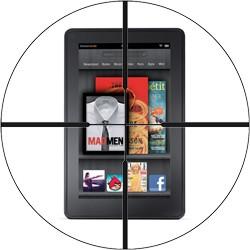 'Tis the season for reflecting upon our many gifts in life and giving thanks for them. If you're Personal Audio, however, once you've thanked your lucky stars that you own a patent on musical playlists, you then file an infringement suit against Amazon. That's right folks, Personal Audio is up to its old tricks again in the Eastern District of Texas, but instead of alleging iPods are infringing its IP, the Kindle Fire is squarely in the company's sites. The patents in question are number 6,199,076 that generally claims an audio player, and number 7,509,178 which claims the aforementioned downloadable playlists. Who knows if Amazon will settle out like Apple did, but as the web retail giant will move a ton tablets (among other things) this holiday season, it should have no shortage of cash do so.

In this article: amazon, audio player, AudioPlayer, eastern district of texas, EasternDistrictOfTexas, ed texas, EdTexas, infringement, ip, kindle fire, KindleFire, lawsuit, legal, litigation, music player, MusicPlayer, patent, patent troll, PatentTroll, personal audio, PersonalAudio, playlists, troll
All products recommended by Engadget are selected by our editorial team, independent of our parent company. Some of our stories include affiliate links. If you buy something through one of these links, we may earn an affiliate commission.
Share
Tweet
Share