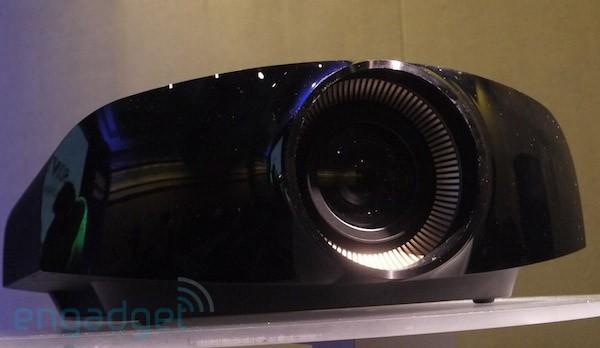 You were so happy with that 1080p projection spread across your garage wall. But then you got up to fetch a beer and noticed horrible fingernail-sized pixels all over Johnny Depp's mustache. The illusion promptly shattered and you realized it was time for an upgrade. An £18,000 (£17,612) upgrade, no less, which will render your Blu-rays bearable again by upscaling them to four times the resolution of Full HD and blasting them out at 2,000 lumens. We've seen the VPL-VW1000ES in action with 2D content from a PS3 and its 'Reality Creation' upscaling algorithm really does make a big difference, but if you absolutely insist on having native 4K video then you'll currently need to budget an extra £40,884 for a player. (Well, you insisted.)

In this article: 4K, 4k projector, 4k x 2k, 4kProjector, 4kX2k, hdpostcross, projector, reality creation, RealityCreation, Sony, sony ericsson, Sony VPL-VW1000ES, SonyEricsson, SonyVpl-vw1000es, UltraHD, upscaling, vpl-vw1000es, VW1000ES
All products recommended by Engadget are selected by our editorial team, independent of our parent company. Some of our stories include affiliate links. If you buy something through one of these links, we may earn an affiliate commission.
Share
Tweet
Share