Ainol launches the NOVO7, the world's first Android 4.0 tablet, for $100 plus shipping 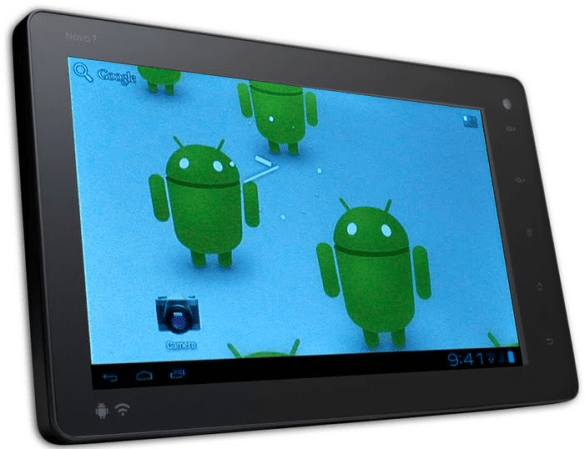 Just as we were geeking out to the Jaguar 7's Ice Cream Sandwich demo and anxiously awaiting the Transformer Prime, Ingenic and MIPS completely took us by surprise by announcing the Ainol-branded NOVO7, the very first commercially available tablet with Ice Cream Sandwich officially loaded. To be specific, the device isn't brand new -- it's been previously available as a Honeycomb tablet and is now shipping with ICS pre-loaded. It's packing an Ingenic JZ4770 mobile applications processor and 1GHz MIPS-based XBurst CPU, which means this Android 4.0 slab isn't going to be the toughest workhorse in the market. What more would you expect from a $99 tablet?

The Novo7 also comes with a 7-inch capacitive touchscreen, a Vivante GC860 GPU clocked at 444MHz, 1080p video decoding, rear 2MP camera with VGA front-facing cam, USB 2.0, HDMI 1.3, microSD slot and an endorsement from Andy Rubin himself. If temptation is just too much to overcome, you can head over to the More Coverage link to order one. However, if you'd rather wait a while to save a few bucks in shipping -- it's over half the cost of the tablet itself -- MIPS informed us that it'll be coming to the States and other parts of the world over "the next several months," and 8- and 9-inch versions of the NOVO are in the works as well. Head below for a video and press release. Oh, and existing NOVO7 customers may be wondering why their tablet hasn't received ICS yet; MIPS assured us that there's an upgrade path for those customers as well, though no announcements have been made.
Show full PR text
MIPS Technologies and Ingenic Semiconductor Announce
Availability of World's First Android™ 'Ice Cream Sandwich' Tablet

According to Andy Rubin, senior vice president of mobile at Google, "I'm thrilled to see the entrance of MIPS-Based Android 4.0 tablets into the market. Low cost, high performance tablets are a big win for mobile consumers and a strong illustration of how Android's openness drives innovation and competition for the benefit of consumers around the world."

The new Android 4.0 tablet is available in China and online through Ainol Electronics Co., Ltd. It will be available in the United States and other geographies within the next several months under brands from companies including Leader International Inc. and OMG Electronics Ltd.

The new tablet is available with a 7" capacitive multi-touch screen. 8" and 9" form factors will be available soon. All versions include support for WiFi 802.11 b/g/n, USB 2.0, HDMI 1.3 and microSD, as well as 3D graphics with the Vivante GC860 GPU, 1080p video decoding and dual front/rear cameras. The XBurst processor's power-efficient architecture provides extended battery life-the 7" tablet draws less than 400mA during active web browsing.

"We are pleased to join with MIPS to announce these breakthrough high-performance, low-power, low-cost Android 4.0 tablets. Combining the elegance of the MIPS architecture and Ingenic's innovation in processor design, we are bringing a new level of processor technology to mobile devices. As we continue to collaborate with MIPS to broaden the mobile ecosystem around the legendary MIPS architecture, we anticipate even broader proliferation of our devices worldwide. We believe the mobile world will be more versatile and colorful with another processor joining in," said Qiang Liu, chairman and CEO, Ingenic Semiconductor.

"The openness of Android is enabling a new level of connectedness and interaction between devices and between people across the globe. We are excited to be a part of the Android ecosystem delivering on that vision. We applaud Ingenic's accomplishment in developing this new high-performance, feature-rich Android 4.0 tablet, and offering it at a price point that makes it widely accessible. We look forward to teaming with Ingenic as it continues to develop MIPS-Based mobile innovations," said Sandeep Vij, president and CEO, MIPS Technologies.

Ingenic JZ4770 SoC
The Ingenic JZ4770 SoC inside of the new tablet is one of the first MIPS-Based systems-on-chips (SoCs) targeted for mobile devices that delivers 1GHz+ frequency, increasingly a requirement for tablets and other devices that incorporate rich multimedia and high-performance applications/functionality. The JZ4770 SoC is powered by a MIPS32 compatible XBurst CPU designed by Ingenic. The XBurst CPU core adopts an innovative ultra-low-power pipelining architecture which consumes less than 90mW in 1GHz (with L1 cache), and the entire SOC consumes ~250mW with the CPU and video engine operating under full load. In addition to the XBurst CPU, the JZ4770 SoC integrates an optimized 1080p video processing engine, OpenGL ES 2.0 3D graphics processing unit from Vivante Corp. and numerous on-chip analog and application blocks such as audio codecs and GPS.

Pricing and Availability
Ingenic's JZ4770 SoC for Android 4.0 tablets is available now. The new Android 4.0 tablet is available in China and online through Ainol Electronics Co., Ltd. at www.ainovo.com. The 7" tablet retails for less than $100 (U.S.) non-subsidized. The tablet will be available in other geographies within the next several months.
In this article: ainol, android, android 4.0, Android4.0, china, google, ice cream sandwich, IceCreamSandwich, ics, ingenic, mips, MIPS novo 7 tablet, MipsNovo7Tablet, novo 7, Novo7, vivante gc860, VivanteGc860, xburst
All products recommended by Engadget are selected by our editorial team, independent of our parent company. Some of our stories include affiliate links. If you buy something through one of these links, we may earn an affiliate commission.
Share
Tweet
Share