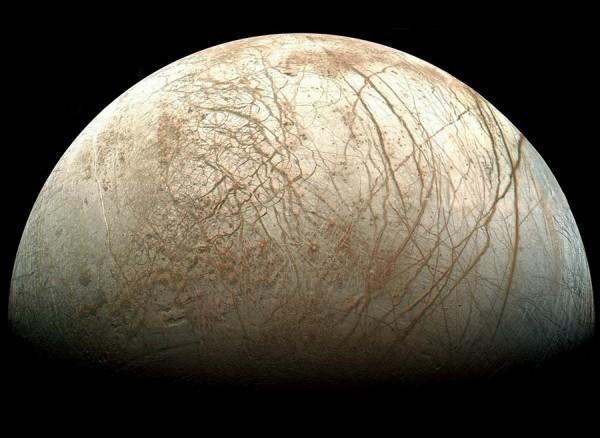 There's still a lot of mystery surrounding Jupiter's moon Europa, but researchers at NASA seem fairly certain that there's a watery ocean lurking beneath its icy exterior. Their theories may finally be put to the test later this decade, thanks to a concept mission crafted by astronomers at the Jet Propulsion Laboratory. According to Space.com, JPL researchers have come up with a plan that would send a pair of landers to Europa by 2026, in the hopes of finding out whether the rock has ever supported life forms. The endeavor certainly wouldn't be easy, since Jupiter blankets its moon in heavy radiation, but researchers think they can mitigate these risks by sending in an extra lander as backup, and by keeping the mission short and sweet. Under the plan, each 700-pound robot would use a mass spectrometer, seismometers and a slew of cameras to search for any organic chemicals that may be lodged within the moon's ice. Neither craft will sport a protective shield, so they'll only stay around the planet for about seven days, so as to avoid any radiation damage. At this point, the mission is still in the concept phase, though the JPL is hoping to launch both landers by 2020. JPL researcher Kevin Hand was quick to point out, however, that this would be a "habitability mission," and that NASA doesn't expect to find any signs of current life on Europa. Lars von Trier was unavailable for comment.
In this article: alien, camera, chemical, concept, Europa, exploration, Jet Propulsion Laboratory, JetPropulsionLaboratory, jpl, Jupiter, lander, lars von trier, LarsVonTrier, life, mass spectrometer, MassSpectrometer, mission, moon, nasa, organic chemical, OrganicChemical, planet, radiation, research, robot, space, space exploration, SpaceExploration
All products recommended by Engadget are selected by our editorial team, independent of our parent company. Some of our stories include affiliate links. If you buy something through one of these links, we may earn an affiliate commission.
Share
Tweet
Share