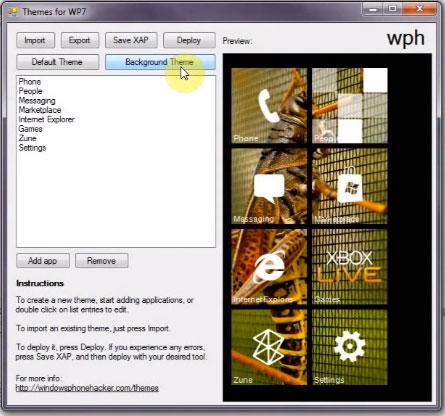 If you've freshly fallen off the Android bandwagon to fill your cup with Mango's nectar, chances are you're still coming to terms with a lack of customization. No longer, as Windows Phone Hacker has just released its Themes for Windows Phone 7 application that puts the power of the live tile into your very willing hands. The program, PC-only for now, applies user-selected images, icons, colors and transparencies to a preferred list of apps, nullifying the need for those pre-set accents. But before you rush to download the file, bear in mind this requires an unlocked handset. So, unless you've cozied up to ChevronWP7 with that $9, you'll just have to watch from the sidelines. Check out the tutorial after the break.

In this article: custom, customize, hack, live tiles, LiveTiles, Mango, mobilepostmini, Themes, Themes for Windows Phone 7, ThemesForWindowsPhone7, video, windows phone 7, WindowsPhone7, WP7
All products recommended by Engadget are selected by our editorial team, independent of our parent company. Some of our stories include affiliate links. If you buy something through one of these links, we may earn an affiliate commission.
Share
Tweet
Share