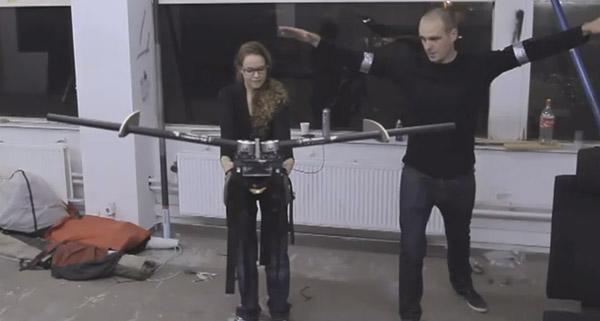 Somewhere, somehow, the Wright Brothers are smiling. Jarnos Smeets, a mechanical engineer from the Netherlands, has been plugging away on his Human Birdwings project for many, many months now, and his latest breakthroughs are absolutely worthy of a peek. Put simply, the bloke has married an HTC Wildfire S, a Wii remote and bookoodles of software genius in order to create a set of wings that are controlled by a human waving his arms as if to fly. As these things tend to go, it's all better explained in video, two of which are hosted up after the break. There's no capture just yet of Jarnos taking off himself, but at this rate, he'll probably be giving Santa a run for his money around this time next year.

In this article: birdwings, diy, flight, fly, flying, hack, hacker, htc, human birdwings, HumanBirdwings, Jarnos Smeets, JarnosSmeets, mod, modder, video, wii, wii remote, WiiRemote, wildfire, wildfire s, WildfireS
All products recommended by Engadget are selected by our editorial team, independent of our parent company. Some of our stories include affiliate links. If you buy something through one of these links, we may earn an affiliate commission.
Share
Tweet
Share