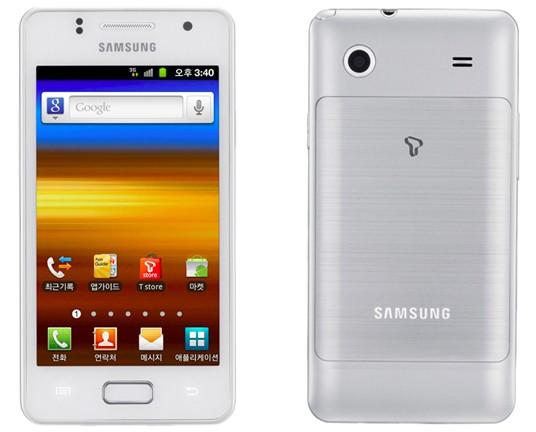 Samsung's 2011 flagship still tantalizingly out of your wallet's reach? Well, you might be tempted by the latest addition to the Galaxy family that's just gone official in Korea. While the shell appears nigh-on indistinguishable from the previously announced Galaxy R, there are some notable spec differences. The M totes a four-inch Super AMOLED screen, not the Super Clear LCD found on the R, while there's also only a single-core 1GHz processor here, not the dual-core Tegra 2 found on its older brother. The camera has also felt the pinch, shrinking from a five megapixel to a three megapixel offering. The Gingerbread handset measures in at just under 10mm thick, while still packing a TV tuner and a metallic body more similar to the Wave series than the plastic-backed Galaxy family. The M moniker places it in the high-end affordable spectrum, according to Sammy's latest naming strategy, priced at around $500, although there's no news on a release outside of its homeland just yet. The phone will arrive in three confusing color options; Platinum Silver [above], Blue Black and Lavender Pink. See whether the specification trade-off is worth it for a dose of Super AMOLED goodness by inspecting the source below.

Samsung Electronics has unveiled a new entry-level smartphone with a 4 inch super AMOLED namely Galaxy M Style in Korea. Galaxy M Style runs on Android 2.3 Gingerbread and features 1 GHz single core processor, 3 million pixel camera, Bluetooth 3.0, 4GB memory internal memory, DMB, 1650 mAh battery. It is just 9.9 mm thin and has a refined metal body with slim design giving you a comfortable grip. Galaxy M Style comes in three colors of Platinum Silver, Blue Black and Lavender Pink with a price of more and less 500 US dollars.
In this article: Android, Galaxy, Galaxy M, Galaxy R, GalaxyM, GalaxyR, gingerbread, Korea, mobilepostmini, Samsung, Samsung Galaxy M, Samsung Galaxy R, SamsungGalaxyM, SamsungGalaxyR
All products recommended by Engadget are selected by our editorial team, independent of our parent company. Some of our stories include affiliate links. If you buy something through one of these links, we may earn an affiliate commission.
Share
Tweet
Share