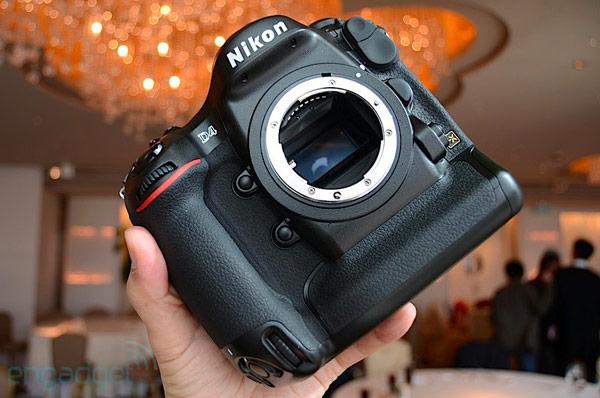 With the onslaught of CES launches still several days away, the big news today is the D4, Nikon's brand new full-frame digital SLR camera. The 16.2 megapixel DSLR offers 1080/30p video capture, an extended ISO range of 100 to 204,800, a 91,000-pixel 3D color matrix meter and a top high-speed shooting option of 11 frames-per-second. And with the D3 first hitting stores nearly five years ago, this FX-mount successor was long overdue. Earlier today, Nikon held its D4 launch event in Asia, previewing the camera before a group of journalists in Hong Kong. We were on hand for a first look at the massive $6,000 pro body, and were quite pleased with what we saw. Jump past the break for our impressions.

In what seems to be a move consistent throughout the industry, the D4's body is strikingly similar to its half-decade-old predecessor. There's no edgy new design to speak of, and all of the controls are exactly where you'd expect them to be. That's not to say Nikon didn't make a few tweaks, however. First, there's a full set of vertical controls for firing the camera and adjusting key settings without awkwardly reaching around the body to access the buttons up top -- an improvement that's sure to be appreciated by portrait and wedding shooters. The main shutter release was also moved slightly forward, for a more natural feel, and a dedicated movie capture button was added. There's also a new pair of joystick-like controls for navigating menus and moving around an image while zoomed in during playback. Overall, the additional controls improve upon the interface without introducing clutter -- an advantage granted by the generous body size.

A larger body also means more room for ports, and the D4 has plenty. To the left of the 3.2-inch, 921k-dot LCD you'll find a proprietary connector for the TW-5A plug-in WiFi adapter that can be used to network cameras wireless and even fire them remotely, using the built-in web server. Below that is a full-size Ethernet jack, if you'd prefer to go the wired route. There's also a remote connector, microphone input jack (!), headphone jack, mini-USB and an HDMI port, which can be used both for video playback and piping out an uncompressed live preview feed, for capturing raw video using a external device. There are also two memory card slots available -- one CompactFlash and one XQD, for use with the high-speed next-gen format announced last month. All the main multipurpose controls are just to the left of the memory card slots, while secondary buttons can be found below and to the left of the LCD -- essential controls are now backlit, making them possible to find in the dark.

We weren't permitted to publish photos and video shot with the D4, so unfortunately we can't speak to the camera's image quality, though we were able to dig up some samples captured by Nikon photographers, including two shot at ISO 6400. Of course, we're just as curious as you about what it's like shooting at ISO 204,800, but it appears that we'll need to wait at least a few more days to find out. For now, hit up the source link for five sample images from Nikon, and stay tuned for our full review.