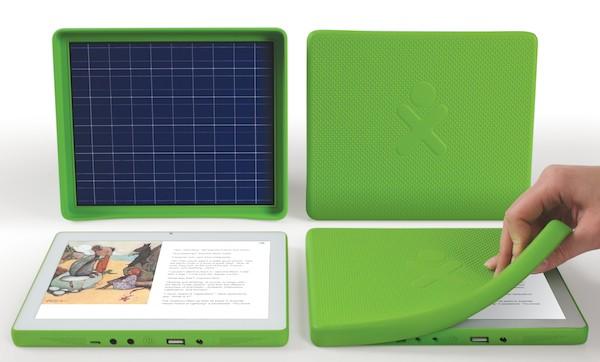 OLPC's XO 3.0 tablet has been in the works for what seems like forever, and now it's finally ready to be unveiled at CES. Nicholas Negroponte apparently either found the unbreakable screens he was looking for or simply decided the crowds at CES 2012 should get to see the new slate first. It's powered by a Marvell ARM PXA618 SoC that runs Android or Linux and has the same Pixel Qi display seen in other OLPCs. Plus, it has special charging circuitry so it can top up its battery using solar cells and hand cranks like its XO 1.75 sibling -- a particularly useful feature in places where electrical sockets are hard to come by. Unfortunately, pictures of the tablet are still scarce, but come on back next week when we get our hands on one at CES. Until then, check out the PR after the break.

Update: We just got pictures of the XO 3.0, and as you can see above, it's coming with a pretty robust cover that doubles as a solar panel for charging the thing. More to come when we see it for ourselves tomorrow.
Show full PR text
Marvell and One Laptop per Child Unveil the XO 3.0 Tablet at CES

Also: The first Marvell ARMADA powered XO 1.75 laptop will begin shipping in March
to school children in Uruguay and Nicaragua

SANTA CLARA, Calif. / LAS VEGAS – (Jan. 9, 2012) – Marvell (Nasdaq: MRVL), a worldwide leader in integrated silicon solutions, and One Laptop per Child, a non-profit organization whose mission is to help every child in the world gain access to a modern education, demonstrated a fully functional version of the much-anticipated XO 3.0 – a low-cost, low-power, rugged tablet computer designed for classrooms around the globe – at the 2012 International Consumer Electronics Show.

"We're proud to introduce the XO 3.0 tablet, showcasing the design, durability and performance features that make it a natural successor for our current laptops, which have been distributed to more than 2.4 million children in 42 countries and in 25 languages," said Edward McNierney, Chief Technology Officer of One Laptop per Child. "The XO 3.0 builds on many of the technology breakthroughs we made with the XO 1.75, including the use of the Marvell® ARMADA® PXA618 processor, resulting in a significant decrease in power consumption-a critical issue for students in the developing world."

"Marvell is committed to improving education--and the human condition-around the world through innovative technology for Smartphones, tablets and a myriad of new cloud-delivered services. Partnering with One Laptop Per Child is one way we can deliver a revolution where it matters most-to benefit children in some of the poorest places on the planet," said Tom Hayes, Vice President of Corporate Marketing at Marvell Semiconductor, Inc. and a member of the OLPC advisory board. "Marvell has been with One Laptop per Child from the start and we're doing whatever it takes to help the organization realize its mission of providing meaningful educational opportunities to the 500 million school-aged children around the world."

Marvell and One Laptop per Child also announced today that the XO 1.75 laptop will begin shipping to customers in March 2012. Over 75,000 units of the XO 1.75 have already been ordered by OLPC projects in Uruguay and Nicaragua. The XO 1.75 uses the Marvell ARM-based ARMADA PXA618 SOC processor, which compared to the earlier XO 1.5, maintains performance while using only half the power. The XO 1.75 features a sunlight-readable screen and all the other features and design characteristics of the two previous versions of the XO laptop.

The XO 3.0 tablet will also feature the Marvell ARMADA PXA618 SOC processor and Avastar Wi-Fi SOC. Other features include:

• Unique charging circuitry; the XO 3.0 is the only tablet that can be charged directly by solar panels, hand cranks and other alternative power sources
• Standard or Pixel Qi sunlight-readable display
• Android and Linux operating system support
In this article: android, ces, ces 2012, Ces2012, laptop, linux, Nicholas Negroponte, NicholasNegroponte, olpc, one laptop per child, OneLaptopPerChild, pixel qi, PixelQi, slate, tablet, xo 3.0, Xo3.0
All products recommended by Engadget are selected by our editorial team, independent of our parent company. Some of our stories include affiliate links. If you buy something through one of these links, we may earn an affiliate commission.
Share
Tweet
Share