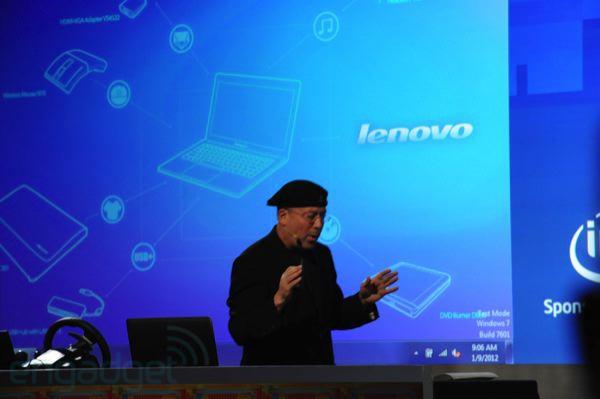 So far in the last hour, we've learned that future Ultrabooks will have NFC, possibly larger screens and touchscreens (maybe even touch-enabled palm rests). Well, we've got one more marquee feature to add to the list: Intel just announced that it's partnering with Nuance to bring voice recognition to Ultrabooks. And it sounds like Intel's vision is comprehensive: the company envisions consumers being able to launch applications, compose emails, update social networks and control media playback. During the keynote, Intel PC client head Mooly Eden even said he would one day like to speak to the computer and have this words appear in a different language. Will that be a feature in the 1.0 product? We'll have to see when it starts hitting Ultrabooks later this year.

Nuance Communications, Inc. (NASDAQ: NUAN) today announced at CES 2012 that it has entered into a strategic collaboration with Intel to bring a natural voice experience to Ultrabooks in 2012 and beyond by leveraging Nuance's leading voice technologies to develop a voice application designed specifically for intuitive and natural command of and control of the Ultrabook experience.

Nuance's Dragon voice recognition technology, which is at the core of the renowned Dragon NaturallySpeaking software used by millions, will be deeply integrated into the new Intel application. Using this new capability, consumers will be able to control their Ultrabook just by using their voice. Consumers will be able to quickly and easily launch applications, play media, interact with social media sites and control their email and calendars with natural voice commands.

"This is truly an exciting partnership, where we'll combine the power of Nuance voice and natural language technologies with Intel powered Ultrabooks, allowing people to interact with their Ultrabook with natural voice commands. Nuance and Intel share a vision for compelling interactions between man and machine, and the two companies will collaborate to optimize for Intel Core processors and Ultrabook designs, resulting in a better end user experience and interactions which will be faster than ever before," said Peter Mahoney, Chief Marketing Officer, Nuance Communications.

Additional launch and product details will be made available later in 2012.

WHAT:
Nuance executives available for additional commentary on Nuance and Intel strategic partnership to bring voice to next generation Ultrabooks.


Nuance's broad product portfolio of voice and touch technologies are trusted by the world's leading manufacturers and mobile operators, and are found in billions of phones and millions of automobiles and consumer electronic devices – making them among the most pervasive solutions on the market today. To learn more, visit www.nuance.com.

In this article: ces, ces 2012, Ces2012, Mooly Eden, MoolyEden, nuance, ultrabook, ultrabooks, voice recognition, VoiceRecognition
All products recommended by Engadget are selected by our editorial team, independent of our parent company. Some of our stories include affiliate links. If you buy something through one of these links, we may earn an affiliate commission.
Share
Tweet
Share