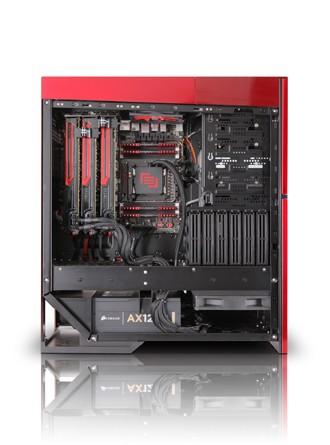 When AMD announced its latest flagship, the Radeon HD 7970, we knew it was fast and efficient (because reviewers said so!), but gamers were told they'd have to wait until the new year to try it themselves. Now, precisely on schedule, the card is available for purchase, and we're starting to hear word of systems that will be refreshed to include the 28nm card. Maingear just said that it will offer the 7970 inside its Shift and F131 desktops, followed by the Vybe at some later date. If you recall, the card has a 925MHz engine that can be overclocked to 1.1GHz, 2,048 stream processors and an unusual 384-bit memory bus serving 3GB of GDDR5 -- not to mention, it's capable of a mere 3W power draw in "long idle" mode. Need even more of a recap on how awesome this card is? Find the full PR after the break.
Show full PR text

MAINGEAR launches the new AMD Radeon™ HD 7970 video card in their award-winning desktops for gamers looking for an incredible gaming experience on the latest and most demanding titles.

This powerful, no-compromise graphics solutions will be available on the SHIFT and F131 MAINGEAR desktops initially and will be offered on the VYBE in the near future, along with their EPIC innovation line of product offerings such as their EPIC CPU Liquid cooling solution. All MAINGEAR products are supported with lifetime labor and phone support in the US, along with one to three year hardware warranty options. For more information about MAINGEAR's desktops with AMD Radeon™ HD 7900 graphic solutions, click here. (www.maingear.com/amd7970)

"'No Compromise' and 'unmatched performance' are an understatement when it comes to what we are seeing in the MAINGEAR Labs" said Wallace Santos, CEO and Founder of MAINGEAR. "With AMD's Radeon™ HD 7970 graphics card, gamers looking for a true over the top gaming experience will find what they are looking for."

"MAINGEAR desktops with AMD Radeon™ HD 7970 graphics cards can help players take their game to the next level with unmatched performance, industry-leading image quality, support for the immersive, wraparound experience made possible with AMD Eyefinity technology, and the full spectrum of DirectX 11 technologies that developers have embraced faster than any other DirectX API before it," said Zvika Greenstein, director of Product Management for AMD Desktop Discrete Graphics. "Users of MAINGEAR desktop products with AMD Radeon™ HD 7970 graphics cards can be certain they are getting a cutting edge gaming rig that is ready for today's and tomorrow's DirectX 11 titles."