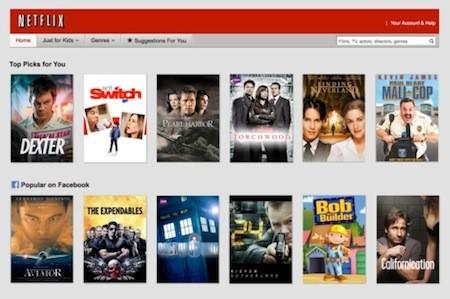 While it was already live for many, Netflix has made its launch in the United Kingdom and Ireland officially official, streaming its catalog of entertainment for 5.99 pounds / 6.99 euros a month. Residents can queue for a one month free trial at the website right now, and at launch it works not only on PCs, but also the usual suite of game consoles, Blu-ray players from LG, Samsung Smart TV, iOS and Android phones plus smart TV adaptors from Philips, Western Digital and Roku. As for content, it's sourcing from All3Media, the BBC, CBS, Channel 4's 4oD, Disney UK & Ireland, ITV, Lionsgate UK, MGM, Miramax, Momentum Pictures, NBCUniversal, Paramount, Sony Pictures Entertainment, Twentieth Century Fox and Viacom International Media Networks. Like the Latin American service, it also includes Open Graph Facebook tie-ins that are apparently held back in the US due to regulatory concerns. Check the official press release for more details on what's currently available after the break, or just hit Netflix to sign up and give the streaming a shot no matter which side of the pond you're on.
Show full PR text
Netflix Launches in The United Kingdom And Ireland
Leading Global Internet Film And TV Subscription Service Arrives In The UK And Ireland
For 5.99 Pounds Sterling Per Month, People Can Now Instantly Watch Unlimited Films And TV Programmes Streamed Over The Internet From Netflix To Smart TVs, Game Consoles, Blu-ray Players, Laptops, Tablets And Mobile Phones
Free, One-Month Trial Available To All

LONDON, Jan. 9, 2012 /PRNewswire/ -- Netflix, Inc. (NASDAQ: NFLX), the leading global internet subscription service for films and TV programmes, launches today in the United Kingdom and Ireland, offering instant and unlimited access to a broad range of entertainment for the low monthly price of 5.99 Pounds Sterling in the UK and euro 6.99 in Ireland.

Starting today, people throughout the UK and Ireland can begin a free, one-month trial of Netflix by simply visiting Netflix.com. Members can select and instantly watch a wide array of Hollywood, local and global TV programmes and films on their TVs via a range of internet-connected devices capable of streaming from Netflix, including Smart TVs, game consoles, Blu-ray players, tablets and mobile phones.

"We are starting 2012 in the best possible way: by giving consumers in the UK and Ireland an amazing entertainment experience," said Reed Hastings, co-founder and chief executive officer of Netflix. "Now, you can enjoy as many great films and TV programmes as you want, when you want, where you want, for one low monthly price with no contracts or commitments."

With more than 20 million streaming members in 47 countries and territories, Netflix has revolutionised entertainment by providing seamless and unlimited access to tens of thousands of hours of Hollywood and international feature films, full seasons of new and classic TV programmes, global documentaries, independent cinema and an incredible range of kids' programming in a specially designed section called "Just for Kids."

Among the tens of thousands of hours of great films and TV programmes available at launch are recent big screen hits such as "The Expendables" and "Paul Blart: Mall Cop;" first-rate American programmes such as "Breaking Bad," "24" and "90210;" previous full seasons of UK favourites including "The Only Way is Essex," "Top Gear," "The Inbetweeners" and "Torchwood;" and a wide-range of documentaries, art house films and classics ranging from "The 39 Steps" and "The Aviator" to "Man on Wire," "The Men Who Stare at Goats," "The Princess Bride" and "Once." In the coming months, more great films and TV programmes will be added, building upon the great entertainment choices available today.

A pioneer in the delivery of high quality streaming video and of advanced recommendation technologies that help consumers find the films and TV programmes they'll love, Netflix offers an unbeatable entertainment experience with many films and programmes available in hi-definition and with Dolby® Digital Plus 5.1 sound.

Netflix is integrated with Facebook to make it easy for people to discover new films and programmes through their friends. Members can connect their Facebook account to Netflix and share what they're watching on both Netflix and their Facebook Timeline. Similar to the success of social music and social gaming, the integration gives people another way to connect with friends around common passions. Members can always control what they share and can turn off sharing anytime, from either Netflix or Facebook.

People in the UK and Ireland can instantly click and play films and TV programmes streamed over the internet from Netflix using the following devices that may already be in their living rooms and a complete range of upcoming TVs, Blu-ray players and other devices.


About Netflix
With more than 20 million streaming members in the Americas, the United Kingdom and Ireland, Netflix, Inc. [Nasdaq: NFLX] is the world's leading internet subscription service for enjoying films and TV shows. For about US$7.99 a month, Netflix members can instantly watch unlimited films and TV programmes streamed over the Internet to PCs, Macs and TVs. Among the large and expanding base of devices streaming from Netflix are the Microsoft Xbox 360, Nintendo Wii and Sony PS3 consoles; an array of Blu-ray disc players, internet-connected TVs, home theatre systems, digital video recorders and internet video players; Apple iPhone, iPad and iPod touch, as well as Apple TV and Google TV. In all, more than 700 devices that stream from Netflix are available. For additional information, visit www.netflix.com. Follow Netflix on Facebook and Twitter.

SOURCE Netflix, Inc.
In this article: hdpostcross, ireland, minipost, netflix, streaming, uk, watch instantly, WatchInstantly
All products recommended by Engadget are selected by our editorial team, independent of our parent company. Some of our stories include affiliate links. If you buy something through one of these links, we may earn an affiliate commission.
Share
Tweet
Share