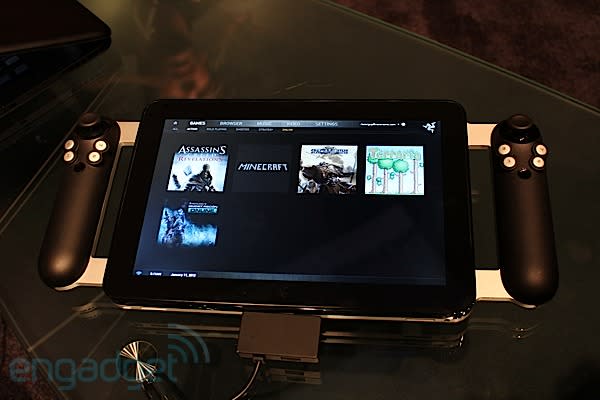 Breaking new ground in the nearly nonexistent market of "hardcore gaming tablets" with renders is interesting, but there's nothing quite grasping something tangible. Razer's project Fiona, for example, is something to grasp -- sporting twin joystick handles on either side, it begs to be held. We couldn't help but oblige, and dropped by Razer's CES booth for a few minutes with the bold Windows 8 slab. Razer CEO Min-Liang Tan gave us the skinny -- read on get it yourself. For a prototype, Fiona felt incredibly solid -- with the exception of a slightly sticky joystick and a very "developer" looking dongle, our demo unit felt like a finished product. The tablet's nunchuk-esque handles were solidly fastened to the device's metal frame, which was sandwiched between soft plastic back, and the devices 10.1-inch touchscreen. The four face buttons on each end weren't as poppy as we'd like, but worked well enough. Min reminded us we were playing with a prototype. The handlebar controllers are mostly comfortable, and far superior to touchscreen gamepad emulation -- but we wonder comfortable they'd feel while using the slate for non-gaming purposes. The entire unit was deceptively light, too -- we couldn't get an official weight out of Min-Liang, but its safe to say that it feels about a third lighter than it looks. It's still a bit too hefty to hold in front of you for an extended period of time, but it was comfortable enough to grip in our lap.

The Fiona runs on a third generation Intel Core i7 processor and an undisclosed GPU -- Min's word was mum on the details, but he promised us it was something hot. And hot it was -- while in game, the Fiona's internals had a lot of steam to blow off. We almost didn't notice notice the heat, though -- the controller-handles on the tablet's flanks aren't just to help you increase your kill count, they also keep your hands from getting burned. The handlebars kept our mits away from them slate's heated rear. Min continued to remind us we were playing with a prototype, and that they were working closely with Intel to ensure the device was adequately cooled.

Min ran us through a brief game of Space Marine, it was playable, smooth and quite fetching. Fiona won't out eye-melt your dedicated gaming desktop, but our pupils flirted with liquefaction. Although Min-Liang told us the specs weren't final, the prototype slab has a native 1280 x 800, 10.1-inch display -- again, it won't compete with your dedicated setup, but on the small screen it still looks nice. Min said that the Fiona is ideal for gamers who want to jump from their desktop, to a more comfortable mobile for excursions -- saving their progress to the cloud from their home machine, and picking up the same game on the Fiona later on. Sounds great, but just how long will a hardcore tablet last you in the great outdoors? Min told us to compare it to an Ultrabook -- he couldn't give us official estimates, but said that he wouldn't be surprised to see the final product last 2-3 hours. That seemed short, but then again, its no worse than the PlayStation Vita's playtime, is it?

Although Fiona is under development, Min-Liang seems confident it will start shipping in the latter half of 2012. It may have accessories, too. Despite it's gamepad and touch centric design, Min told us that it won't be closed off to any of Razer's other products -- suggesting that Fiona docks and accessories will open the Windows 8 slate up to a more traditional computer interface.

The Fiona's been under wraps for awhile, and is approaching its proposed release window quickly. Unlike the Switchblade, Min told us, project Fiona is a prototype being designed for the market, and not a concept device. Expect to see it, he said. We will -- its an intriguing, bold take on tablet gaming. We're not sure how we'll like the handlebars while web browsing, or checking email but we'll give it the benefit of the doubt for now -- or at least hope the final rig's controllers are detachable.
In this article: ces, ces 2012, Ces2012, core i7, CoreI7, dolby home theatre v4, DolbyHomeTheatreV4, Fiona, gaming, gaming tablet, GamingTablet, hands-on, Intel Core i7, Intel Corporation, Ivy bridge, IvyBridge, Microsoft Windows, Project Fiona, ProjectFiona, Razer, Razer tablet, RazerTablet, Sci/Tech, Steam, THX, video, Windows 8, Windows8
All products recommended by Engadget are selected by our editorial team, independent of our parent company. Some of our stories include affiliate links. If you buy something through one of these links, we may earn an affiliate commission.
Share
Tweet
Share