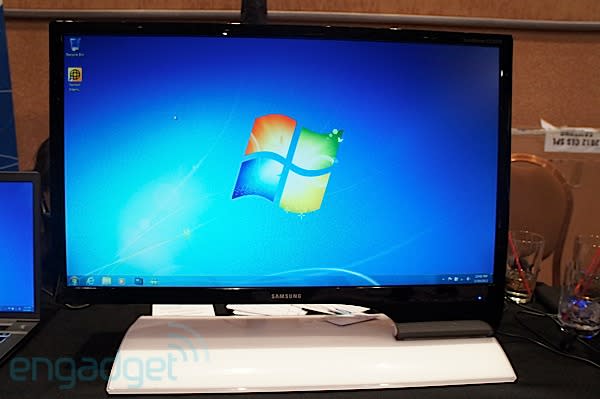 Of the two monitors Samsung announced last week, the Series 7 was decidedly the middle-of-the road number. But that's not saying much, seeing as how its big brother, the Series 9, is Sammy's first consumer display with a plane line switching panel, and has a 2560 x 1440 pixel count. The Series 7, available in 24- and 27-inch sizes (both 1080p), uses the same matte, 400-nit, SuperBright Plus panel you'll find on the newly announced Series 9 laptop, and as ever it looks bright and clear, even in the face of some oblique viewing angles. For the money ($600 and up), it also has built-in WiDi and MHL, along with an integrated TV tuner. So far as we can tell, after having seen it in person, the biggest thing you'll lose once you step down from the Series 9 (aside from the PLS bit) is design flair. Whereas the Series 9 has a slim aluminum build with glowing touch controls, the Series 7's glossy surfaces pick up fingerprints quite quickly. (Then again, this more or less rocks the same design as last year's Series 9 flagship, so how bad could it be?) Have a peek at our shots below, and stay tuned for a separate look at the Series 9 -- for whatever reason, the one on display at tonight's press event was powered off for the night, so we'll be back sometime soon when we can show you that high-quality PLS display in the buff.


Sean Buckley contributed to this post.
In this article: ces, ces 2012, Ces2012, display, displays, hdpostcross, hdtv, samsung, samsung series 7, samsung series 9, SamsungSeries7, SamsungSeries9, series 7, series 7 hdtv, series 7 monitor, series 9, series 9 monitor, Series7, Series7Hdtv, Series7Monitor, Series9, Series9Monitor
All products recommended by Engadget are selected by our editorial team, independent of our parent company. Some of our stories include affiliate links. If you buy something through one of these links, we may earn an affiliate commission.
Share
Tweet
Share