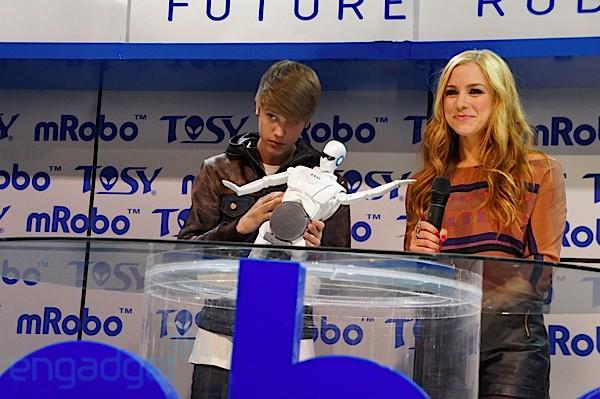 Beethoven's Fifth. Michelangelo's Pietà. Plato's Republic. Cornerstones of human civilization, to be sure, but they all pale in comparison to what we saw today at CES: TOSY's new mRobo robot, inspired by none other than the Cultural Colossus of our time, Justin Bieber. The Vietnamese manufacturer and pubescent Prince have just taken the wraps off their latest collaboration: a petite, portable speaker-robot that dances -- nay, transcends -- just like his only slightly larger progenitor counterpart. When in speaker mode, the mRobo weighs in at just 3.3 pounds, stands a little under eight inches tall, and boasts 2GB of internal memory. Its integrated speaker pumps out the jams at bass levels of 40Hz, but the real magic happens once the music starts playing, automatically prompting the system to transform into an 18-inch tall robot and start dancing. Unfortunately, the bot is still in prototype mode, but it's expected to retail for about $200 when it launches during the fall of 2012.

Today, though, we were lucky enough to get a sneak peak of the mRobo, courtesy of a mic'd-up Messiah with sweepy bangs and a leather jacket. Upon taking the stage to roars of applause and Jelly Bean sunshowers, Bieber went on to do a brief demo of the bot, displaying its ability to sync its dance moves to whatever tunes blare out of its abdomen speaker -- in this case, Billie Jean. The mRobo looked admittedly clumsy at times, and was especially awkward when onstage with the teen phenom, but, as TOSY repeatedly reminded us, it's still in prototype phase. (Bieber, for his part, did a good job of looking completely awestruck throughout much of the experience.) Before descending from his bubblegum pulpit, Bieber reminded his acolytes to "follow your dreams." Ours, at least, have just been realized. Follow yours past the break, straight to our hands-on video. Boasting two gigabytes of internal memory, the battery powered mRobo allows users to upload about 500 songs into the device via a USB port and select which tracks to play using a provided remote. The music will play through an integrated speaker, with the ability to produce bass at 40Hz. Once the music begins playing, mRobo, which can listen to its own music, music from other devices, or music streamed via Bluetooth, will instantly transform, growing a head, legs and arms, and will groove through a series of pre-programmed dance moves to virtually any genre of music.

"mRobo is one of the most innovative and interactive entertainment devices ever introduced," said Ho Vinh Hoang, Founder and CEO, TOSY Robotics JSC. "It gives music and dance lovers the ability to enjoy their passions in a whole new way. Not only do they have a great new way to listen to their favorite songs but they also have a new partner to dance to their favorite music with. We're thrilled to be able to unveil mRobo Ultra Bass here at CES 2012 with the help of one of the world's most recognized stars, Justin Bieber."

Its capacity to transform back into a speaker makes mRobo completely portable and ideal for the consumer on the go. As a speaker, mRobo weighs approximately 3.3 pounds and measures 4.3 inches (W) x 6.3 inches (L) x 7.9 inches (H), and stands at just under 18 inches when it transforms into a robot. The battery operated mRobo uses software to analyze music for beats and rhythms to which it responds with corresponding moves.

mRobo Ultra Bass is expected to retail for $199.00 (USD) and launch in the fall of 2012. For additional information regarding mRobo and the full line of TOSY robotics, please visit www.tosy.com and visit the TOSY Booth in the Las Vegas Convention Center South Hall Ground Level Booth #21964 during CES 2012.
In this article: audio, baby baby baby, BabyBabyBaby, bass, belieber, bieber fever, BieberFever, bot, ces, ces 2012, Ces2012, dance, dancing, demo, dreams, justin bieber, JustinBieber, mrobot, music, OMGOMGOMG, portable speaker, PortableSpeaker, prototype, robot, software, speaker, tosy, truth, video, wisdom
All products recommended by Engadget are selected by our editorial team, independent of our parent company. Some of our stories include affiliate links. If you buy something through one of these links, we may earn an affiliate commission.
Share
Tweet
Share