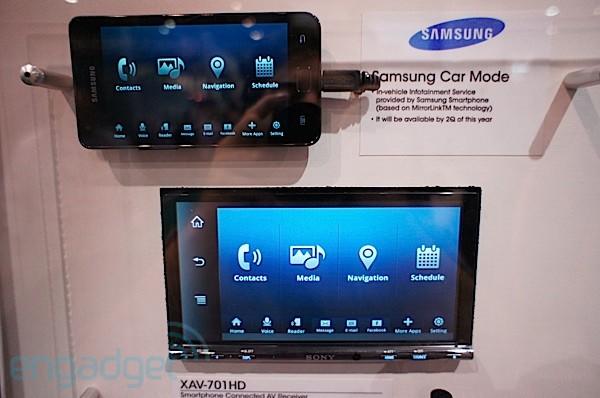 For everybody who's waited with bated breath for the widespread arrival of MirrorLink, take heed because the smartphone / car stereo integration technology is about to make a significant splash in the first half of this year. Along with the Sony XAV-601BT and the XAV-701 HD -- two MirrorLink-enabled Sony head units set for a Q2 arrival -- we've also just learned Samsung will introduce MirrorLink support for its smartphones during this time frame as well. Even Sony Ericsson's jumping into the fray, although the company wasn't able to provide any additional details regarding availability. Be sure to read on for our impressions of the new toys, along with a video of the same. While neither the Samsung nor the Sony Ericsson were yet functional demos, we took the opportunity to play with the Nokia 701 and the paired XAV-601BT. Needless to say, we were presented with a brilliant and functional interface that allowed quick and seamless access to the maps, music and telephone features of Nokia Car Mode. The 601BT ($549) features a removable face and a 6.1-inch WVGA touchscreen, while its larger brother, the 701HD ($699) sports a 7-inch WVGA display and HD radio. The interface was a bit showy, but also offered quick navigation through the relevant apps and features.

The most unique element of Mirror Link is the ability for smartphone manufacturers to throw their own interface onto a car stereo. For instance, it seems that Sony will add quick links to traffic, parking and weather (along with the standard navigation, music and phone links), in an interface that's somewhat reminiscent of Windows Phone Metro. Meanwhile, it appears that Samsung is going absolutely crazy with its implementation, which includes features such as calendaring, voice recording, email and, yes... Facebook. Admittedly, we're a bit weary of drivers updating their status at a stoplight, but that's not going to stop us from grabbing new car stereos this summer.
In this article: automotive, car audio, car mode, CarAudio, CarMode, ces, ces 2012, Ces2012, deck, hands-on, head unit, HeadUnit, in-dash, mirrorlink, mobilepostcross, nokia, samsung, smartphone, smartphones, sony, sony ericsson, SonyEricsson, terminal mode, TerminalMode, video, XAV-601BT, XAV-701 HD, Xav-701Hd
All products recommended by Engadget are selected by our editorial team, independent of our parent company. Some of our stories include affiliate links. If you buy something through one of these links, we may earn an affiliate commission.
Share
Tweet
Share