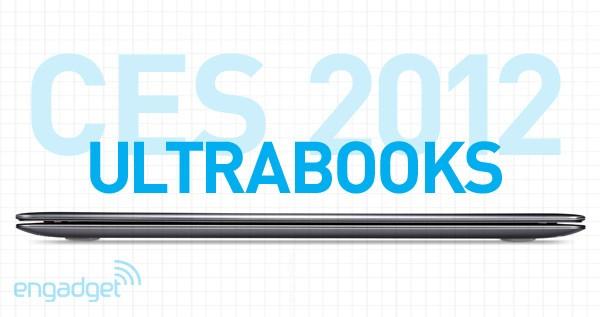 CES is drawing to a close, and the gadgets released here will define the market for the year. Intel is betting the farm on its Ultrabook concept as its hardware partners continued to push out the first real wave of laptops designed to take on the MacBook Air (who thought we'd be saying that four years ago?). Whatever your feelings on these devices, given Santa Clara's billion-dollar advertising push, you won't be able to ignore them this year. So, let's take a look at five of the best products that rolled off the keynotes into the hands of our editors.

Acer's S5-shaped go on the Ultrabook gravy-train is a three-pound, 13.3-inch lappy that'll turn on instantly, toting a sleek onyx black magnesium-alloy cover, Thunderbolt port and an SSD for easy flinging. Improving on the design of the S3, it's the world's thinnest Ultrabook, measuring just 15mm and feels significantly more premium. Sadly it's not all gravy: it's got a scratchy, shallow keyboard which we're not sold on. What we do love is that the ports drop down from a motorized back cover -- Thunderbirds fans out there will adore it just for that.

Dell's been waiting to show off how thin it could make a device and the XPS 13 didn't disappoint. The company's first Ultrabook tapers from 18 to 6mm and is made from aluminum and carbon fiber -- and with the attendant weight loss. The entry-level unit's got a Core i5 CPU, 128GB SSD, 4GB RAM and a backlit keyboard. It reeks of understated quality, even though it's only $1,000, but the port selection is pretty basic: it doesn't include an SD card slot, which we think is an unforgivable crime in the year 2012. Corporate IT buyers who need to be conscious of roaming-employees' luggage allowances: this is going to be a go-to product.

Samsung's revamped Series 9 shouldn't be on this list, because it's not an official Intel-sanctioned Ultrabook. That doesn't stop us giving it honorary status because of its extreme thinness. The company spent last year listening to user feedback from the original Series 9 and threw out everything customers hated. Gone are the soft touch finishes and launch buttons, so the dimensions are more like those belonging to a 12-inch device. The 15-inch Series 9 is also special, mostly because it's the only laptop that thin with that large a display.

Of all the thin and light laptops named after Bond movie villains we've seen at this year's CES, it was a tough choice between the Quantum Octopussy and HP's Envy 14 Spectre. The latter $1,400 computer is a "premium Ultrabook," built from glass, weighing 3.79 pounds and rather sadly stretching the definition of "thin and light," considering it measures 20mm. It's a hefty chunk of laptop considering the razor-sharp thickness of some of the other machines on offer. Fortunately, HP did something with all that extra heft, including a radiance display, NFC in the palm rest, Intel Wireless Display spanning and Beats Audio. Sadly, this device sails so close to the Intel-stipulated wind that it's essentially just a laptop.

Lenovo's IdeaPad Yoga is another device that isn't branded as an Ultrabook, but that's what it is: no tablet would weigh three times that of an iPad 2. The 17mm thick flip-over device can be used as a laptop, tablet or kickstand-tablet for movie watching. You'll want to watch movies on this thing, too: it's got a 1600 x 900 IPS multitouch display, unheard of in a device of this caliber. It'll retail for around $1,000 when Windows 8 arrives, but even the prototype models scream of quality. None of these other devices ship with a touchscreen and is cheaper than the less capable HP Envy -- if we were buying one of these devices today, our money would be on this device.

Dana Wollman and Jon Turi contributed to this report.
In this article: Acer S5, AcerS5, BestofCES, BestOfCes2012, CES, CES 2012, Ces2012, Dell XPS 13, DellXps13, HP Envy 14 Spectre, HpEnvy14Spectre, Laptop, Laptops, Lenovo Ideapad Yoga, LenovoIdeapadYoga, RoundUp, Samsung Series 9, SamsungSeries9, Ultrabook Roundup, UltrabookRoundup, Ultrabooks
All products recommended by Engadget are selected by our editorial team, independent of our parent company. Some of our stories include affiliate links. If you buy something through one of these links, we may earn an affiliate commission.
Share
Tweet
Share