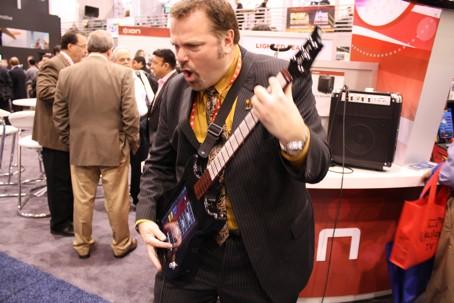 We first saw ION Audio's really impressive iCade followups at the beginning of CES last week during CES Unveiled, but that little taste at the crowded event wasn't really enough for us, so later in the week we went by the company's booth to get a better look and actually hold and play with the new products.

Of the various iCade implements on display, the most impressive was undoubtedly the iCade Mobile -- that's the (mostly) PSP-based Bluetooth controller setup which your iPhone or iPod touch can plug into. The company had the great Mos Speedrun working on the device, and the buttons felt great and were very responsive.

The one issue with the controller is that the "triggers" (normally L2 and R2 on PS3 or Xbox controllers) aren't really triggers -- they're just buttons, and a lot of gamers, especially those who play shooters, often prefer the Microsoft style trigger controls rather than just wide buttons. The model we played with had buttons that were actually just an extension of the metal around the side, so they sort of "bent" in as you pressed them, but the ION rep told us that the final version will be separate from the side metal, which means they'll press in straight. Still, just having buttons back there might not be quite as nice as full triggers, if there are games that make heavy use of them in the future.

Given that developers step up with compatibility on their apps (and ION has had a lot of success with that on the original iCade cabinet), this device could be a must-have for a lot of hardcore iPhone gamers. Of course, it bears mentioning Apple doesn't really provide a great deal of support for gaming peripherals. In fact, all of these devices are simply sending button presses (like a keyboard would), so until iOS supports more input controls, Ion will similarly be limited. he handheld launches sometime this spring, and will be available for $79.99.

I also got to play with the iCade Jr., a much smaller version of the iCade cabinet that's designed for iPhones or iPod touches rather than the iPad. The model on display wasn't a working version, but it was enough to feel what it was like to hold the device and press the buttons on the backside. Unfortunately, the whole thing felt about as gimmicky as it looked -- I'm sure the games will be playable when they're finally released, but obviously the mini cabinet isn't built for comfort so much as it is a cute little version of the larger thing. That one will also be out in a few months, for $49.99.

And finally, we checked out ION's other big iOS product this year at CES, called the Guitar Apprentice. This one is huge -- it's a "guitar controller" for iPad, so it's a plastic guitar-shaped device with dozens of little buttons on it designed to serve as the frets on a guitar. Your iPad is actually inserted straight into the frame on the guitar's body, and eventually (though this wasn't yet working at the show), the idea is that you'll press buttons on the guitar controller's neck, and then "strum" by swiping across your iPad.

It was an interesting idea, but the app wasn't done by CES, apparently, so all that the Guitar Apprentice did so far was when you pressed any of the fret buttons, the iPad would play the appropriate musical notes. It actually worked well -- I could play chords or "pluck" specific frets with ease, though the mechanics were obviously different than playing a real guitar. Hopefully, if ION makes a solid app for the iPad, the controller will serve as a nice set of training wheels for anyone wanting to actually learn a little bit of guitar.

The controller itself will be $99 when released, and the app will be available for free. ION had some really excellent offerings at CES this year -- the company seems bolstered by the iCade's success, so we can probably expect to see even more cool iOS products from ION Audio in the future.

In this article: controller, education, gaming, guitar, guitar apprentice, GuitarApprentice, icade jr, icade mobile, IcadeJr, IcadeMobile, ion, ion audio, IonAudio, iOS, iPad, iPhone, kids, learning, music, products
All products recommended by Engadget are selected by our editorial team, independent of our parent company. Some of our stories include affiliate links. If you buy something through one of these links, we may earn an affiliate commission.
Share
Tweet
Share