Latest in Department of energy and climate change 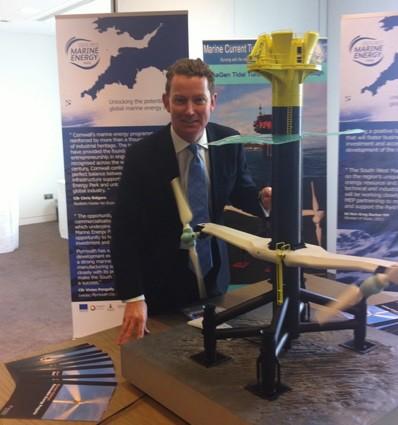 The West Country is home to some of the finest engineering anywhere in the UK, thanks to the region's historical patronage of Isambard Kingdom Brunel. That reputation will continue thanks to the Department of Energy and Climate Change naming it as the home of the nation's first marine energy park. Running from Bristol, past Cornwall and out to the Isles of Scilly, the tidal-power plant is expected to generate 27 Gigawatts of power, the equivalent of eight coal-fired power stations. Of course, harnessing the energy of the seas isn't something we'll be seeing soon as the project's earmarked to be ready for 2050, around the same time we're likely to get LTE.
Show full PR text
South West makes splash as first marine energy park

The South West has today been named as the UK's first Marine Energy Park, firmly placing the region on the international map for leadership in marine renewable energy.

Climate Change Minister Greg Barker made the announcement on a visit to Bristol where he met with key members of the new initiative.

The South West Marine Energy Park will stretch from Bristol through to Cornwall and as far as the Isles of Scilly. It will create a collaborative partnership in the region between national and local government, Local Enterprise Partnerships, the Universities of Plymouth and Exeter and industry including Cornwall's famous Wave Hub. The aim of the partnership will be to speed up the progress of marine power development.

Energy from the waves or tides has the potential to generate up to 27GW of power in the UK alone by 2050, equivalent to the power generated from 8 coal-fired power stations, as well as helping to reduce emissions to fight climate change.

"This is a real milestone for the marine industry and for the South West region in securing its place in renewables history as the first official marine energy park. The South West can build on its existing unique mix of renewable energy resource and home-grown academic, technical and industrial expertise.

"Marine power has huge potential in the UK not just in contributing to a greener electricity supply and cutting emissions, but in supporting thousands of jobs in a sector worth a possible £15bn to the economy to 2050.

"The UK is already a world leader in wave and tidal power, so we should capitalise on this leadership to make marine power a real contender in the future energy market."

During his visit, the Minister launched the South West Marine Energy Park Prospectus which outlines how the region's public and private sector will work together with the government and other key national bodies such as the Crown Estate.

The work to develop the South West Marine Energy Park has been commissioned by Cornwall Council and Plymouth City Council. The work was undertaken by Regen SW.

"Cornwall's marine energy programme is reinforced by more than a thousand years of industrial heritage. The land and the sea have provided the foundation of Cornish entrepreneurship in engineering and innovation, recognised across the world. Now, in the 21st century, Cornwall continues to provide the perfect balance between resource, people and infrastructure supporting the South West Marine Energy Park and unlocking the potential of a global industry. "

"The opportunity for growth and increased commercialisation in marine renewable energy, which underpins the ethos of the South West Marine Energy Park, represents a major opportunity to help Plymouth's economy generate investment and jobs. Plymouth has world - class research and development expertise in this field along with a strong marine business base and advanced manufacturing sector and looks forward to working closely with its private and public sector partners to make the South West Marine Energy Park a success."

"The launch of the South West Marine Energy Park is a recognition of the great resources, research facilities and businesses we have in the region - it also puts the South West in a position to attract future investment, and to be at the forefront of the new global marine energy industry"
In this article: Department of Energy and Climate Change, DepartmentOfEnergyAndClimateChange, Eco, Eco Power, EcoPower, Gigawatt, Green, Marine Energy, Marine Energy Park, MarineEnergy, MarineEnergyPark, Tidal Power, TidalPower
All products recommended by Engadget are selected by our editorial team, independent of our parent company. Some of our stories include affiliate links. If you buy something through one of these links, we may earn an affiliate commission.
Share
Tweet
Share