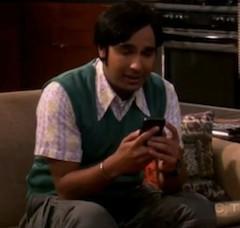 The most recent episode of CBS's sitcom The Big Bang Theory rather prominently features Siri in its "B" storyline. Astrophysicist Raj, one of the show's main characters, buys an iPhone 4S and spends most of the episode interacting with the voice-activated "personal assistant."

As is typical for the show, Raj's interaction with Siri rapidly goes off the deep end; the character is notorious for striking out with women due to a psychologically-induced speech block when any females are nearby, but he has no problem talking to Siri. His interactions with his iPhone begin with the initial novelty that all iPhone 4S users likely experience when they first use Siri, but over the course of the episode Raj's attitude toward Siri starts to become increasingly creepier.

Both my wife and I noticed that Siri's real voice isn't used in the episode; we initially put it down to licensing issues, but it turned out there was an in-episode reason for using a human substitute for Siri's voice that pays off at the end.

When I watched this episode last week I thought this storyline was pretty funny (the half-bottle of Merlot I had with dinner probably helped), but watching it again now makes me feel more uncomfortable than amused. I get that The Big Bang Theory derives most of its laughs from over-the-top exaggerations of geeky behavior, but toward the end of this latest episode it got to be a little bit too exaggerated.

What's most interesting about this episode is that it must have gone into production not too long after the iPhone 4S was first announced, and probably no more than a week or two after the handset became available in the States. Within a relatively short space of time the show's writers managed to assemble most of the more humorous Siri interactions into a coherent storyline that's perfectly in line with the show's conventions.

A video of Raj's interactions with Siri is embedded below, or at least until CBS releases the hounds on YouTube.

In this article: CBS, comedy, iPhone, iPhone 4S, Iphone4s, Siri, sitcom, The Big Bang Theory, TheBigBangTheory, TV
All products recommended by Engadget are selected by our editorial team, independent of our parent company. Some of our stories include affiliate links. If you buy something through one of these links, we may earn an affiliate commission.
Share
Tweet
Share