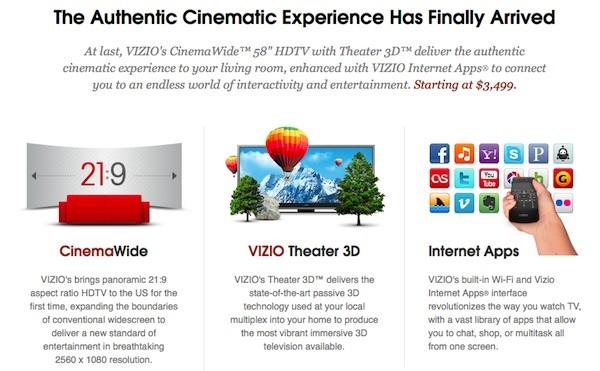 We were told at CES last month to expect Vizio's ultrawidescreen LCDs would hit the market sooner rather than later, now we know how it will fit into our budgets, even if we're not sure how the aspect ratio will fit in our living rooms. Similar to the way its first Theater 3D TVs popped up last year, the XVT 3D CinemaWide product page reveals a 58-inch model (50- and 71-inchers are also planned) sporting its trademark 21:9 aspect ratio (compared to a traditional HDTV's 16:9) and 2560x1080 resolution will start at $3,499. It also has an array of specs, measuring the 120Hz Edge LED lit screen at 56.7-inches wide by 29-inches high and 1.8-inches deep. Just as we saw when they were first announced at CES 2011, Vizio upscales Blu-ray and other wider-than-widescreen sources to fill the screen without those black bars we've become accustomed to. If you're watching standard HD programming, the extra space alongside can accommodate tiles for Yahoo! Widgets pulling information from the internet without blocking the picture at all. Check our gallery below for a better look and a demo video after the break, we'll keep an ear to the ground to find out when and where these displays might hit the market first.

Update: Vizio tells USA Today to expect this set to launch ahead of March Madness -- the better to manage our completely-useless-by-the-Sweet-16-because-Gonzaga-won-again brackets on.
[Thanks, chilipalm]