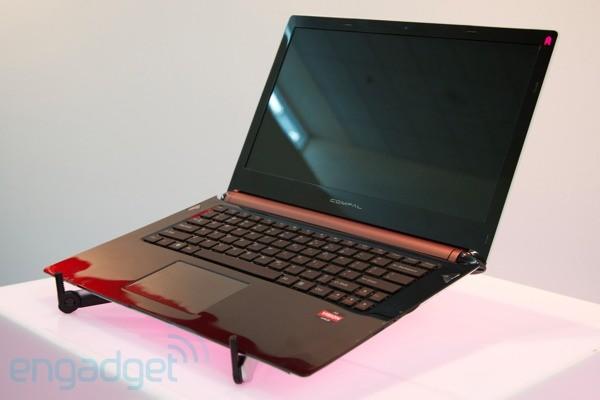 Here at AMD's Financial Analyst day, the company had a little demo area which is where we spotted this little number -- an ODM reference unit from Compal, stuffed with the company's upcoming Trinity APU. We're told the unit above is one of several, which are proof-of-concepts used to convince and show OEMs powerful, yet thin machines the duo hopes they'll bring to market. Inside this particular prototype is one of the lower voltage variants of Trinity (read: either the 17W or 25W part), which enables that svelte 18mm profile. Seeing as it is a one-off (and one that'll never come to market in this form), our impressions are moot, yet we'd be remiss if we didn't point out we were a little dismayed by its chassis, which was flimsy enough to put the existing flex champion, Toshiba's Z830, on notice. Still, with an estimated starting price of half an Ultrabook (roughly in the $500 to $600 range), we'll leave it up to you to decide exactly how much you value torsional rigidity. Other then that, viewing angles seemed good from the brief demo reel we watched, and there's plenty of connectivity onboard, with two USB 3.0 ports, mini-DisplayPort and HDMI flanking the left, followed by audio jacks, another USB, Ethernet and power along the right. Looks like thin and lights are about to get a whole lot more interesting later in the year, which, frankly is great -- it's about time Chipzilla got some worthy competition.

22
In this article: 18mm, amd, amd trinity, AmdTrinity, apu, compal, compal reference design, CompalReferenceDesign, concept, non-ultrabook, ODM, ODM sample, OdmSample, OEM, reference design, ReferenceDesign, thin and light, ThinAndLight, trinity apu, TrinityApu
All products recommended by Engadget are selected by our editorial team, independent of our parent company. Some of our stories include affiliate links. If you buy something through one of these links, we may earn an affiliate commission.
Share
Tweet
Share