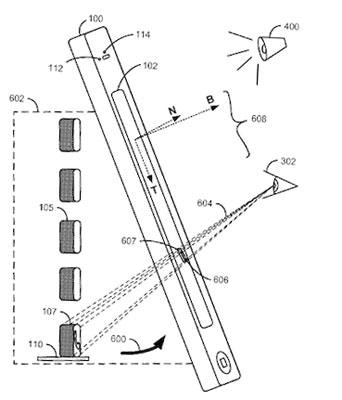 Murmurs of an iPad 3 on the horizon not doing it for you? How about a new pseudo-3D interface? A patent filing has whet our appetites with the possibility (that's what it is; a possibility) of a future Apple device capable of gauging depth and displaying a 3D environment based on the user's eye movement. On-screen content would adjust to your eye movement, expanding items where ever your eyesight falls. It would also create a "virtual 3D operating system environment," where the user would feel like the UI projects beyond the two-dimensional screen. The patent includes details on 'realistic' drop shadows for icons and other OS furniture based on the degree and angle of ambient light. The filing, from April 2010, says that the technology would use an accelerometer, GPS and 'gyrometer' to reference the placement of the device and report on its movements. Sound interesting? Those in need of more foggy details and line drawings can hit up the full patent request at the source below.

In this article: 3d, 3d interface, 3dInterface, Apple, Apple patent, apple patent application, ApplePatent, ApplePatentApplication, patent, us patent and trademark office, UsPatentAndTrademarkOffice, USPTO, virtual 3D operating system, Virtual3dOperatingSystem
All products recommended by Engadget are selected by our editorial team, independent of our parent company. Some of our stories include affiliate links. If you buy something through one of these links, we may earn an affiliate commission.
Share
Tweet
Share