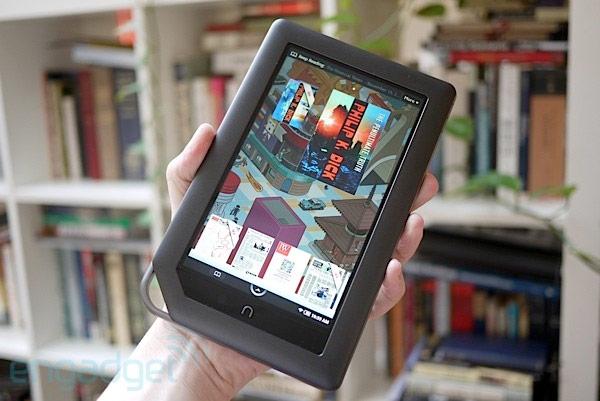 It's that time of the year when Barnes & Noble's accountants reveal the figures for the quarter to determine if the age of print is over. Turns out there's some good news for bookseller. Overall sales for the chain increased five percent: the company took $2.4 billion through the cash registers. That was split $1.49 billion (up two percent) in high-street retail, online sales took $420 million (up 32 percent year-on-year) and the Nook in all its forms and glories took $542 million (up 38 percent). The only grey cloud was that sales in college-only stores dropped three percent, thanks in part to renting textbooks to impecunious freshmen. They're probably all using that money on buying digital content on their Nooks: digital content purchases increased by 85 percent in a single quarter. Like rival Amazon, it wouldn't release how many devices were sold, except to say it likely maintained its market share.

However, all of that (pretty) good news is a bit of a smokescreen: B&N won't reveal its profits after interest, taxes, depreciation and amortization has been deducted. Pre ITDA income dropped 12 percent from the same period in 2011 and the company has revealed that the BN.com and Nook businesses made a combined loss of $94 million, with annual income looking to be in negative figures.

Barnes & Noble College ("College") sales declined 3% from $540 million to $525 million, due to a shift from selling new and used textbooks to lower priced textbook rentals. Comparable store sales were flat as compared to a year ago. College comparable store sales reflect the retail selling price of a new or used textbook when rented, rather than solely the rental fee received and amortized over the rental period.

BN.com sales increased 32% over the prior year, from $319 million to $420 million. Comparable sales increased 42%, on top of a 64% increase a year ago. This increase was driven by continued growth of NOOK device and digital content sales, offset by a decline in online physical product sales.

The consolidated NOOK business across all of the company's segments, including sales of digital content, device hardware and related accessories, increased 38% during the third quarter to $542 million, on a comparable sales basis. NOOK unit sales, including NOOK Simple Touch™, NOOK Color™ and the new NOOK Tablet, increased 64% during the third quarter as compared to the same period last year. Digital content sales increased 85% on a comparable basis. Content sales are defined to include digital books, digital newsstand, and the apps business.

BN.com and NOOK comparable sales reflect the actual selling price for eBooks sold under the agency model rather than solely the commission received. Additionally, it includes all deferred eReader device revenues, and includes device sales to channel partners on a "sell-in" basis net of estimated returns.

Earnings before interest, taxes, depreciation and amortization (EBITDA) declined 12% as compared to the prior year, from $170 million to $150 million. Retail EBITDA grew from $178 million to $207 million, driven by comparable sales growth, higher product margins and store expense leverage. College EBITDA declined from $43 million to $37 million, impacted by the increased adoption of textbook rentals, where earnings are deferred over the term of the rental, rather than recognized at the point of sale. In the third quarter, an incremental $12 million of EBITDA from textbook rentals was deferred as compared to last year, the majority of which will be realized in the fourth quarter. BN.com EBITDA losses increased from $50 million to $94 million, as the company continued to invest in its rapidly growing NOOK business, including advertising costs and personnel.

The company expects full year earnings before interest, taxes, depreciation and amortization (EBITDA) to be in a range of $150 to $180 million and full year losses per share to be in a range of $1.40 to $1.10.
In this article: 2020, Amazon, Barnes Noble, Barnes and Noble, Barnes and Noble Nook, BarnesAndNoble, BarnesAndNobleNook, BarnesNoble, BN Nook, BN.com, BnNook, Book, Books, Bookseller, Business, e book, e books, e reader, e readers, e-book, e-books, e-reader, e-readers, Earnings, Financials, Nook, Nook Color, Nook Reader, Nook Tablet, NookColor, NookReader, NookTablet, Numbers, Q3, Q3 2012, Q32012
All products recommended by Engadget are selected by our editorial team, independent of our parent company. Some of our stories include affiliate links. If you buy something through one of these links, we may earn an affiliate commission.
Share
Tweet
Share