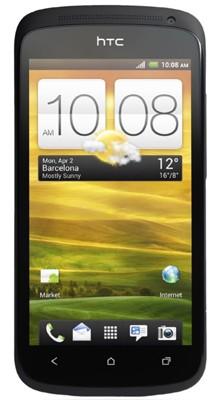 HTC's new phone appears to be its middle-weight offering, but it's still looking to impress with a 4.3 inch Super AMOLED display and a new dual-core 1.5GHz Qualcomm Snapdragon S3 S4 (MSM8260A) inside set to do the heavy-lifting. Previously known to leak fans as the Ville, HTC's brought Ice Cream Sandwich to the fold, alongside the very latest version of its Sense UI -- 4.0 to match that Android version number. The highlight here appears to be that uniformly thin alloy unibody; in science terms, it's a plasma-heated micro arc oxidation process, giving HTC's typical aluminum frame a smooth ceramic finish and apparently toughening it up on the way. Camera-wise, it's wielding a potent eight megapixel sensor with HTC's very own ImageChip and a f/2.0 autofocus lens that's likely to blow all of its previous camera modules out of the water. HTC has focused on the camera software too -- the One S apparently capable of nabbing shots in under a second and the ability to capture full-size stills during 1080p recording. All this, and it's a mere 7.9mm thick. We'll be hunting down a model for a hands-on as soon as we're finished here. Expect to see our impressions very soon, check HTC's video preview after the break now.

In this article: android 2.3, Android2.3, apt-x, aptx, dual-core, Google, HTC, HTC One S, HtcOneS, launch, mobilepostcross, MWC, MWC 2012, Mwc2012, One S, OneS, Snapdragon S4, SnapdragonS4, video
All products recommended by Engadget are selected by our editorial team, independent of our parent company. Some of our stories include affiliate links. If you buy something through one of these links, we may earn an affiliate commission.
Share
Tweet
Share