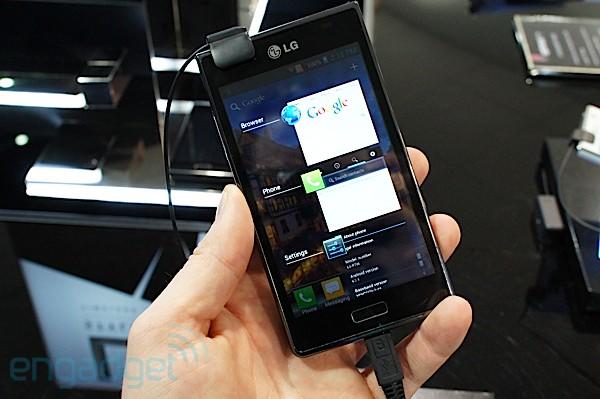 LG's Optimus L-style family of (slightly more) affordable devices is here, packing a similar designer flavor to the Prada phone 3.0 alongside some reduced specifications. Three models made their debut here at MWC, from the 4.3-inch Optimus L7 to the dinkier 3.2-inch L3, with the 4-inch L5 offering a size and specification compromise right in the middle. Skip on past the break for some first impressions. 
The Optimus L7 caught our eye immediately. LG's high-to-mid-level phone arrives with Ice Cream Sandwich, however it only houses a 1GHz processor and five-megapixel camera sensor. LG's outdoor-friendly NOVA display arrives with a 480 x 800 resolution, although it found it difficult to outshine the bright lights of LG's booth. It's a light slab of hardware and like the Prada phone, there's some solid finishing on the sliding microUSB port and the same metallic finish running around the edges. The backing has vertical ridging along it to help grip it and the company has already prepped both a black and white version. Despite the lower specifications, Ice Cream Sandwich worked perfectly well; multitasking was a bit temperamental, but it otherwise coped with internet browsing and other tasks perfectly well.

The L5 has a few differences, with a smaller 4-inch (320 x 480) display, 800MHz processor and NFC all built-in. The backing has a translucent finish to it, but the screen has some pretty miserable viewing angles. The Optimus L3 arrives at the bottom of LG's 2012 collection, with a 3.2-inch 320 x 240 touchscreen and an underwhelming 3-megapixel camera on the back of a solid -- but tubby -- 12mm profile. Unfortunately, it looks like the 600MHz processor wasn't able to step up to the Android 4.0 game, instead taking a step back into 2011 with the latest version of Gingerbread. However, we assume some "competitive" pricing will add some extra appeal. The three handsets will be coaxing out low-price smartphone hunters later this year.

In this article: Android, Gingerbread, Google, hands-on, ICS, L syle, L3, L5, L7, LG, LG L Style, LgLStyle, LSyle, mobilepostcross, MWC, MWC 2012, Mwc2012, Optimus L3, Optimus L5, Optimus L7, OptimusL3, OptimusL5, OptimusL7
All products recommended by Engadget are selected by our editorial team, independent of our parent company. Some of our stories include affiliate links. If you buy something through one of these links, we may earn an affiliate commission.
Share
Tweet
Share