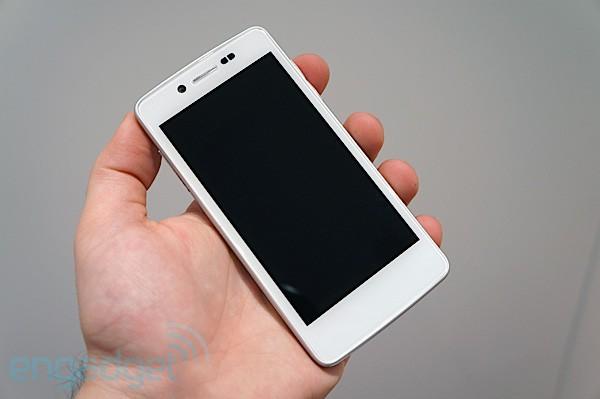 Ever heard of Tianyu? You probably haven't, but that's why the Chinese manufacturer left most of the heavy PR lifting for its ICS-equipped, quad-core phone to NVIDIA at this year's Mobile World Congress 2012. Details on this Tegra 3-based Android handset are admittedly scarce for the time being, but from what we were able to glean, the 4.3-incher should be able to hold its own in the high-end smartphone market. Aside from an 8 megapixel shooter with single LED flash on its back and the aforementioned CPU clocked at 1.5GHz, there's not much else to divulge spec-wise.

In terms of build, the design is a mixed bag. From afar, the Treasure V8 appears sleek and even (dare we say it?) sexy, but once the unit's in hand, you'll notice the cheapness of the glossy, white plastic enclosure. A metal trim borders the device lending to the mix of high and low quality materials used in its construction, but actually makes the phone uncomfortable to hold. The screen also tapers in towards the edges, leaving a ridge to form that's unpleasant in the hand. It doesn't appear that this is the final build of the product and it could even wind up becoming sleeker as it approaches an indeterminate launch, so there's room for improvement. Of course, pricing and availability for China are also unknowns, but we have a feeling that could very well be resolved in the coming weeks. Check out the gallery below and head on past the break for a brief video tour.


Dana Wollman contributed to this report.
In this article: Android, Android 4.0, Android4.0, China, hands-on, Ice Cream Sandwich, IceCreamSandwich, K-Touch, K-Touch Treasure V8, K-touchTreasureV8, Mobile World Congress, mobilepostcross, MobileWorldCongress, MWC, mwc 2012, Mwc2012, NVIDIA, quad-core, Tegra 3, Tegra3, Tianyu, Treasure V8, TreasureV8, video
All products recommended by Engadget are selected by our editorial team, independent of our parent company. Some of our stories include affiliate links. If you buy something through one of these links, we may earn an affiliate commission.
Share
Tweet
Share